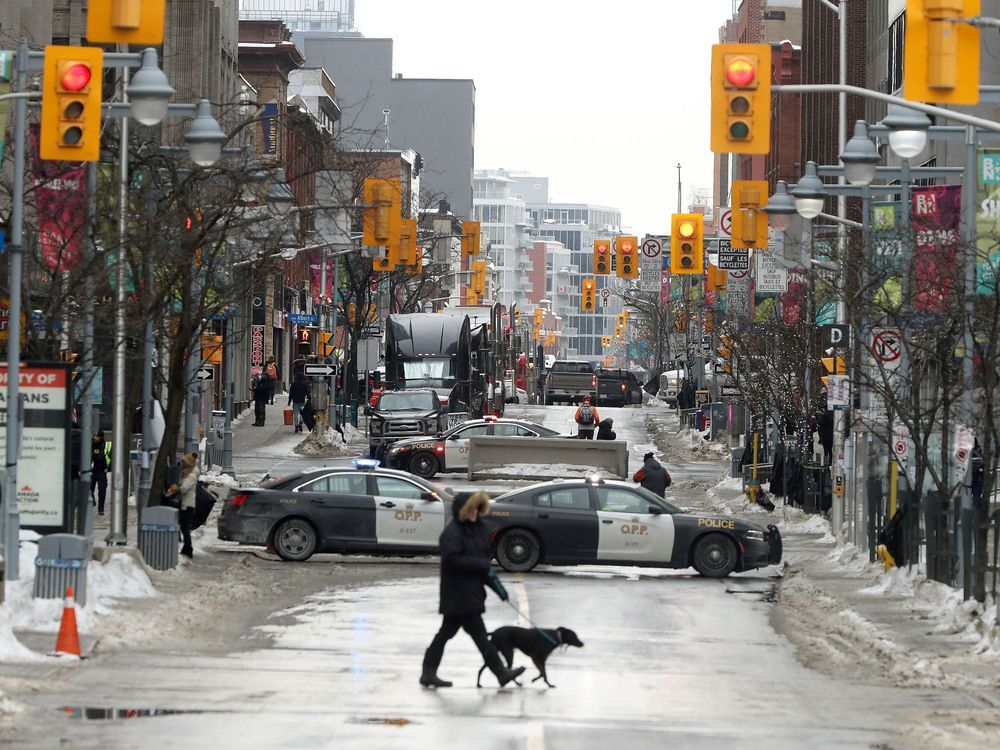 “My team is ready to move quickly. We are prepared. That material is ready to go. We just need to identify what we would be asking the court to stop,” city solicitor David White said during a council meeting.

White fielded several questions from councillors about city hall’s reluctance to send lawyers to the courthouse next door and to file an injunction application related to the protest, which on Wednesday reached Day 13.

It took someone from the community — Centretown resident Zexi Li —  to put her name on a court application, leading to a judge recently granting a 10-day injunction on horn honking downtown.

“To me, it puts council and the city to shame,” Rideau-Vanier Coun. Mathieu Fleury said, noting the immediate impact the Li-led injunction had on cutting the disruptive noise in his central-east ward and in the downtown core.

But White said there were several factors to consider before a government appeared before a judge asking for more enforcement powers.

For one, the city would need to make sure an injunction application wasn’t too broad and impacted people’s rights under the Charter.

All 47 Photos for Gallery

Also, White said a judge might ask about the laws and bylaws that existed already to stop an activity.

The ability of police to actually enforce a new injunction order is another major factor.

The Ottawa Police Service has said it needs 1,800 more police officers and civilians to properly handle the protest, so there’s a degree of managing the public’s expectations on ticketing and arresting injunction scofflaws.

White said his legal team had been working closely with Ottawa police in case the police force believes a city-requested injunction would help.

The Ottawa Police Service is the lead agency managing the protest.

Councillors seemed eager to nudge the legal department to the courthouse, starting with Coun. Theresa Kavanagh, who won council’s support for a motion to have staff consider targeting open-air fires as part of an injunction application.

Idling big rigs have also drawn the ire of councillors, with Somerset Coun. Catherine McKenney describing a “serious concern” about the effect of exhaust on people’s health. Coun. Keith Egli, chair of the Ottawa Public Health board, said city health officials had told him they agreed that idling was a health concern.

While an injunction application could target the parked trucks and other vehicles clogging downtown streets, the city would have problems clearing the corridors since no one wants to provide protest-specific heavy towing services to the City of Ottawa, including the municipality’s own staff.

Many residents have asked if the city could borrow military equipment to move vehicles, but there’s a strong reluctance by police and city to request help from the Canadian Forces.

City manager Steve Kanellakos said it would be hard to use military equipment without engaging the military.

The city on Wednesday received judicial approval to increase fines for some bylaw offences, hoping they would deter nuisance and protect people.

Offences related to noise, use and care of roads and open air fires now have maximum fines of $1,000, or $1,130 when victim surcharges are added to the ticket.

The city is also requesting an increase in fines “for certain relevant offences” under the idling bylaw, Chapman said.

Under the changes, the fines have increased by up to 10 times.