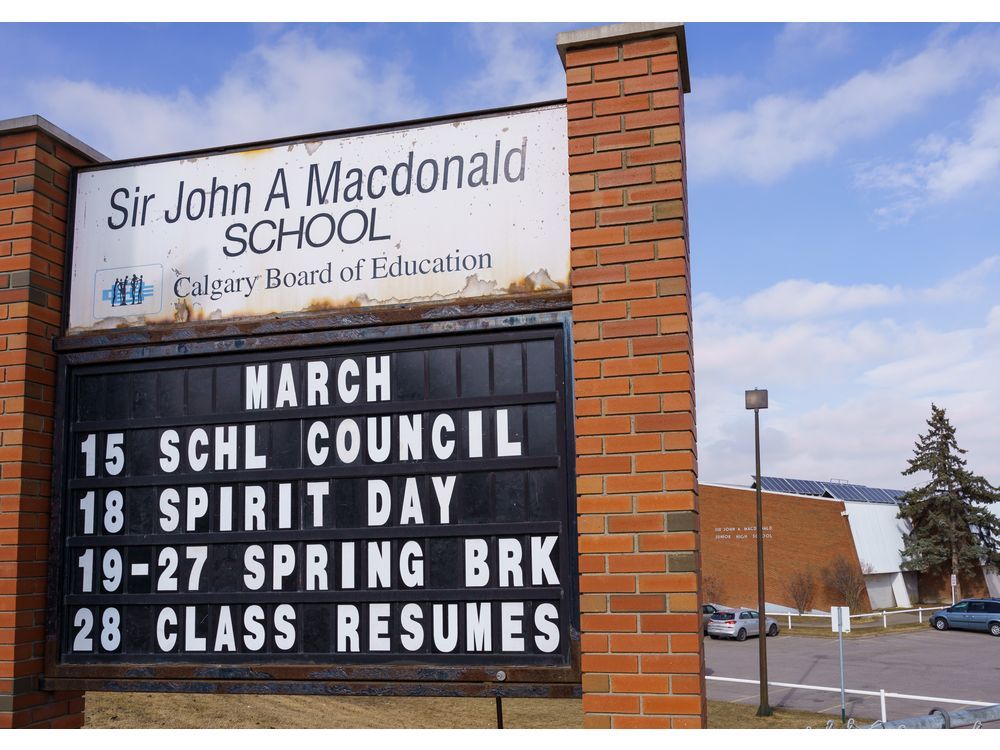 A new committee will recommend whether to rename a Calgary junior high school bearing the name of Canada’s first Prime Minister, John A. Macdonald, who is widely considered an architect of the country’s residential school system.

The Calgary Board of Education’s board of trustees announced Monday it would form the name review committee for Sir John. A. Macdonald School, in the northwest community of Huntington Hills.

In a news release, trustees said there is a “complex history” attached to the name of the school and said the committee will help the board make an “informed decision” on whether to change its name. The committee will make a recommendation on renaming, but the final decision will lie with trustees.

Advocates, including students and Indigenous people, have led calls for the CBE to rename the school. Macdonald was a champion of Canada’s residential school system, whose stated aim was to assimilate Indigenous children.

The Truth and Reconciliation Commission found the schools amounted to cultural genocide, estimating in its final report 6,000 children died while attending these schools, though precise numbers are unknown due to incomplete record keeping. Hundreds of potential unmarked graves have been found at the sites of former residential schools in recent years, including in Alberta; Canada’s last residential school closed in 1997.

The history is clear on Macdonald’s legacy, according to Michelle Robinson with the Reconciliation Action Group, which has helped lead efforts to rename the school.

She called it a “slap in the face” for CBE trustees to form a committee, instead of moving to rename the school immediately.

“We shouldn’t even have to have this conversation about why something is racist or wrong. It should be quite established, especially in a so-called time of reconciliation,” Robinson said.

“It is wilful to decide to not see that history, and that’s what the Calgary Board of Education is doing.”

Robinson called for the CBE to appoint an Indigenous trustee to its board, and said it’s essential Indigenous voices are centred in the renaming committee.

Seven people will sit on the committee, a group that will include board trustees, CBE staff, the school council chair and community members.

The terms of reference for the renaming committee say it will “review and consider historical research and analysis related to the school name” and engage with stakeholders. Trustees voted to form the committee at their April 26 meeting.

“The board is committed to conducting this work in a thoughtful manner that considers the diverse perspectives of students, staff, families and community members,” trustees said in a news release.

Student Makena Halvorsen, who is among those who have advocated for a name change, said she was happy to hear the committee would be formed.

“After everything we’ve been doing, they’re starting to acknowledge it,” Halvorsen said. “This is just a beginning stage, so I hope it keeps on going, so that we can hopefully rename the school.

Two other Calgary schools which carried the names of Canadians who were proponents of residential schools were recently renamed.

In June 2021, the CBE changed the name of Langevin School to Riverside School, removing the name of prominent residential school architect Hector-Louis Langevin. That decision was made by trustees without involvement of a committee.

Alberta Premier Jason Kenney has criticized efforts to remove the names of historical figures, including Macdonald, from public institutions.

Speaking in June 2021, Kenney argued “cancelling Canadian history” was not the right way to approach reconciliation.