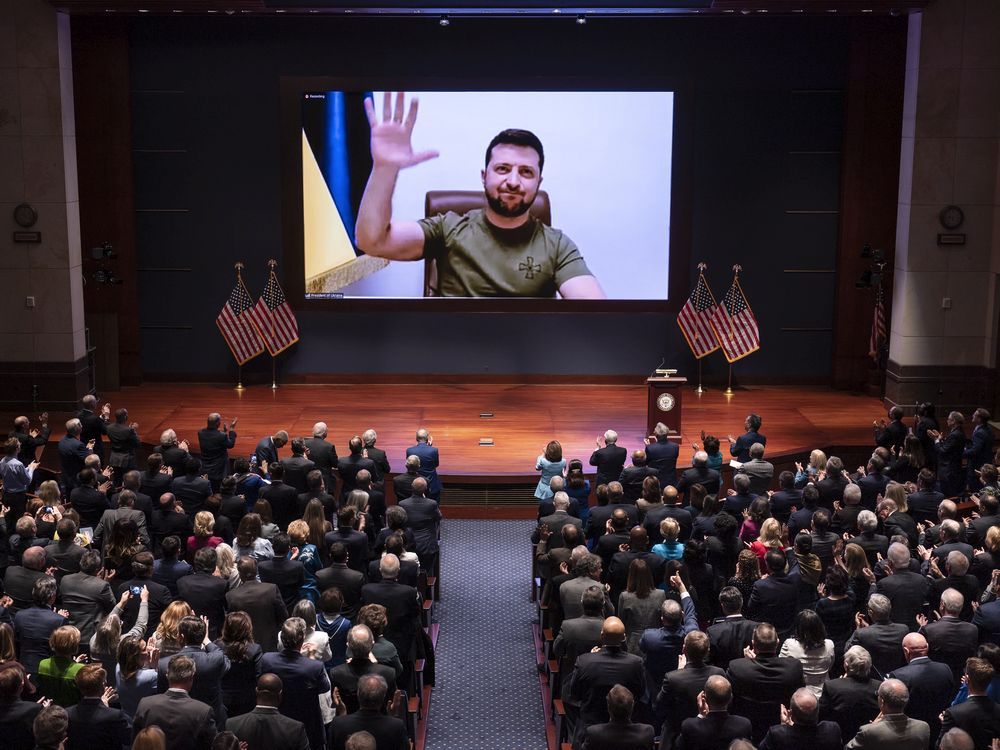 Bad enough you had to genuflect before Donald Trump. You were on either end of that “perfect conversation” with Trump that led to his first impeachment.

You needed military aid, which had been approved by Congress but withheld by the White House. Trump embarrassed you. He made you beg. He does that.

Your critics dismissed you as a comedian, surrounded by comedians. Big joke. As president, they said you were seriously out of your depth.

“Mr. Zelenskyy, the showman and performer, has been unmasked by reality,” wrote Olga Rudenko, chief editor of The Kyiv Independent, days before Russia invaded. “And it has revealed him to be dispiritingly mediocre.”

Lt.-Col. Alexander Vindman, the military adviser who was run out of Trump’s White House, piled on, too. As the Russians massed on the border and you affected insouciance, he scoffed on television. He doubted you.

It was hard for you in politics. You were called naïve, feckless, inept, unfunny and unable to stop the corruption. You were no longer the startling arriviste who won 73 per cent of the vote in 2019.

Humiliating. But not as demeaning as going on a virtual speaking tour of the world’s legislatures over the last two weeks. Your plea everywhere: Send arms. Impose sanctions. Create a no-fly zone.

When you addressed Canada’s Parliament Tuesday, it must have been especially galling. There you were, in requisite adapted battle fatigues, sleepless and unshaven, Che Guevara, Hồ Chi Minh and David Ben-Gurion amid the legion of the well-scrubbed. You made a strong, eloquent case — the greatest piece of theatre since Winston Churchill was here in 1941.

Unlike him, you had no need to say that your people are made of more than “sugar candy.” You did not mock Putin for promising to wring your neck, as Hitler promised Britain.

Still, it is degrading to be a petitioner, imploring for a big, rich, safe country like ours to do more. For your sins, you had to listen to Justin Trudeau and Jagmeet Singh, whose immemorable words were punctuated by the cries of a baby a few seats away.

Canada got 12 minutes of your time, which is all we deserved. After all, didn’t Trudeau tour Europe last week, uttering platitudes, refusing to increase military spending because, you know, that would be more provocative than those “non-lethal weapons” we sent you before the shooting began?

President Zelenskyy, you must know just how little Canada matters abroad anymore. We could provide more weapons and more money, and take more refugees, but we dissemble. We remain the world’s gentle giant of gesture. As Bobby Kennedy put it in 1962: “Canada offers all aid short of help.”

Alas, you face more important things — existential things, Shakespearian things — than divining the Solomonic meaning of Canada’s “unwavering and steadfast support.” No wonder you spent longer with the U.S. Congress on Wednesday. It was a better use of your time.

You don’t know how much time you have left, but you are using it brilliantly. As Churchill was a tragedian, invoking history, you’re a showman, seeking empathy. As Churchill knew radio and newsreels, you know Zoom and Telegram.

Soon, tragically, you’ll face the most agonizing decision of your life: whether to die in a smoking bunker in Kiev, where the Russians are coming to kill you, or to flee, mounting a heroic stand elsewhere.

When it all goes bad, you’ll have to decide if you should take that “ride” and form a government-in-exile, as Charles de Gaulle did in London. In that event, by the grace of God, go. Please.

Whatever you do, understand one thing: you’re no longer the jester, the impersonator, the satirist of your former life. You’re the real thing: master of media, authentic celebrity, homme de guerre in the iconic T-shirt. Among the melting snowflakes, you’re a raging blizzard.

You’re in it until the end, President Zelenskyy, mediocre no more.

Andrew Cohen is a journalist, a professor at Carleton University and author of Two Days in June: John F. Kennedy and the 48 Hours That Made History.