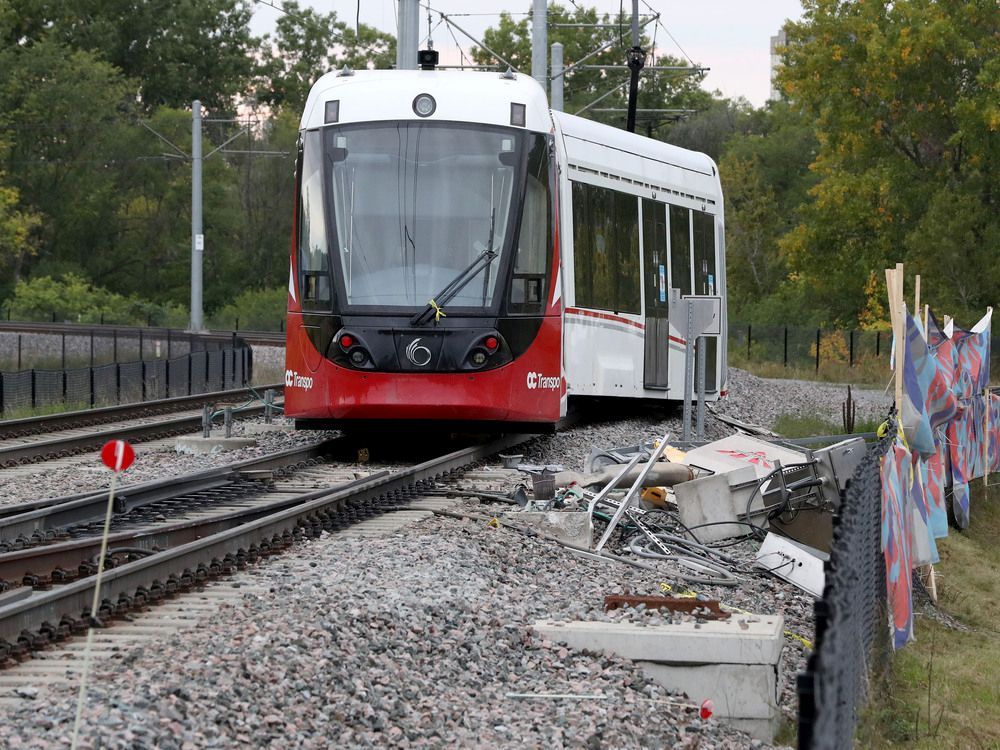 The allegations are contained in an affidavit filed with court documents in response to a city application asking for a judge to recognize a contact default related to two derailments in 2021.

After the September 2021 derailment on the Confederation Line, the city’s contracted LRT maintenance company wanted to see a video recording from the train to better understand what happened.

According to Rideau Transit Maintenance, it wasn’t until a month later that it was able to view the video, but only under the watchful eye of city staff. RTM’s boss says his workers weren’t even allowed to work the controls on the video playback.

The allegations are contained in the affidavit of RTM CEO Mario Guerra, whose observations were filed with court documents this week in response to a city application asking for a judge to recognize a contact default related to two derailments in 2021.

The first derailment happened near Tunney’s Pasture Station on Aug. 8, when a wheel severed from one axle of an out-of-service Alstom Citadis Spirit train. No one was hurt.

The second derailment on Sept. 19 happened near Tremblay Station. About a dozen customers were onboard a train when a gearbox loosened from an under-torqued wheel assembly. There were no injuries. The city closed the entire LRT system until Nov. 12.

In issuing the default notice to RTG after the September derailment, the city said it didn’t have confidence in RTG and the consortium’s maintenance affiliate RTM to manage and respond to the safety incident. The two sides were already at odds over a city-issued default notice in March 2020.

An erosion of trust in the LRT public-private partnership is one theme that has emerged in the court filings.

In his affidavit, Guerra chronicles RTM’s work trying to view city-held video from front-facing train cameras after the September derailment. RTM has direct access to the station cameras, but not to the train cameras.

“Because RTM is better positioned than the city in terms of technical expertise in rail, there are issues that RTM or Alstom technicians may identify from this footage that the city would not,” Guerra said in his affidavit. “Additionally, since RTM was being delayed in its other inspection work, this was one of the few things we could do to start the inspection process.”

Guerra said the city had been “content” with providing video after previous requests, but it was a different story after the September derailment.

According to Guerra, the city initially delivered the video on a USB device. That USB device was sitting on the desk of RTM’s maintenance director when a city rail staffer saw it and took it, saying RTM shouldn’t have access to it without city supervision, Guerra’s affidavit said.

Guerra said the city required RTM to fill out a “master video request” form and the company submitted the document on Sept. 21.

It wasn’t until the afternoon of Oct. 20 that RTM and Alstom, which is RTM’s main subcontractor, were granted an opportunity to view the video, but only with a city staffer operating the controls, according to Guerra, who said the viewing sessions were longer than they should have been.

According to Guerra’s affidavit, “any time the city reviewer arrived at a part of the footage where a person’s face was visible on camera, they would stop or fast-forward the video, citing privacy concerns.”

The city’s video playback didn’t have the ability to slow the images down frame-by-frame, which is a feature of RTM’s technology, Guerra said.

RTM also wasn’t allowed to interview the OC Transpo operator of the train and only received a statement from the operator, Guerra said.

Guerra offered the story in his affidavit as he recalled the ways the city, in the eyes of RTM, delayed re-opening the LRT system.

However, the city said often during the temporary shutdown last fall that it was unwilling to reopen the LRT system until management was satisfied it was safe to do so after an assessment by expert consultants.

The city remains uncertain about the ability of RTG and RTM to adequately maintain the Confederation Line.

In his own affidavit filed in court this week, city rail construction director Michael Morgan rejected claims by RTG and RTM that the city’s court application was fuelled by political pressure.

Morgan said RTG’s performance had been poor through the maintenance term, which is not even three years into a 30-year deal.

None of the allegations in the affidavits have been tested in front of a judge. Hearing dates haven’t been scheduled.