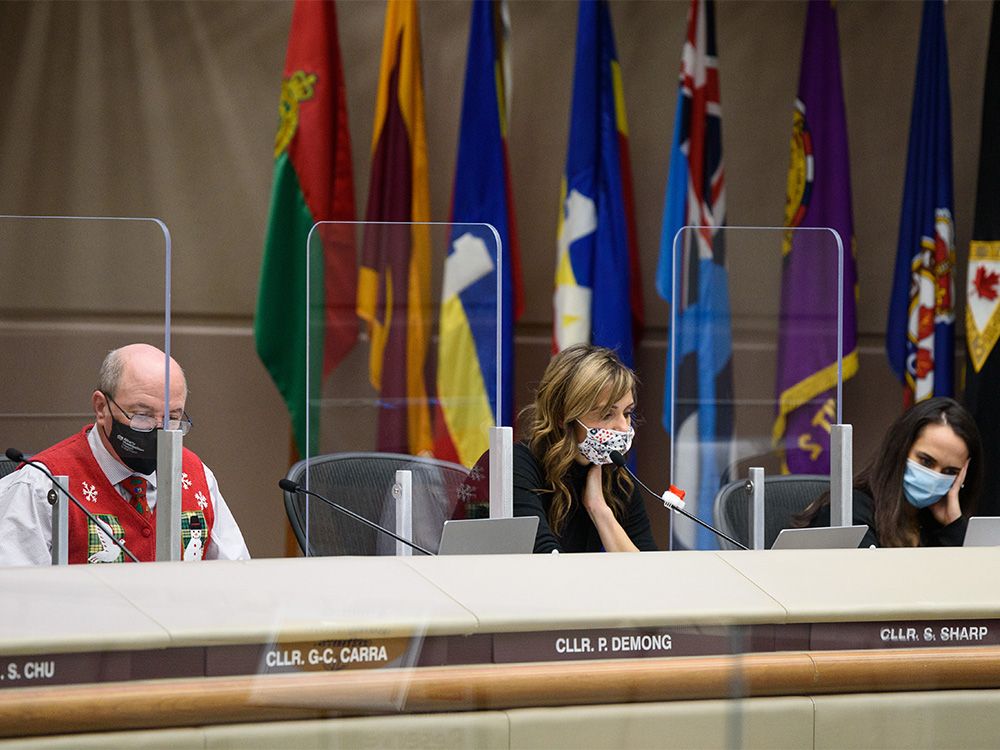 Two Calgary councillors are continuing to seek answers as data show women left jobs at city hall at a higher rate than men in 2021, though the turnover rate was nearly identical for women and men in leadership positions.

Women working for the city had a 7.6 per cent voluntary turnover rate in 2021, compared with 6.8 per cent for men, according to city data. Women in leadership positions, however, had a turnover rate of 10.3 per cent, while men had a rate of 10.9 per cent.

Coun. Sonya Sharp raised concerns at a council meeting in April about women leaving jobs at the city, specifically pointing to five women in high-level positions who left within a few months of each other.

“There have been more people quitting, and again women, there are two that I’ve been made aware of,” Sharp said Wednesday over the phone.

“There are men leaving the corporation, too, we know that. I would say on the surface, we’ve seen more women in the last little while leaving.”

She said she wants to know more about the reasons staff are leaving and why there were more women overall who left in 2021. With the city currently undergoing a realignment project, the Ward 1 councillor said there could be several factors at play.

“We have to bring something forward to dig into it a little bit deeper,” Sharp said.

Sharp, who worked for city administration for 20 years before her election to council in October, said she and Coun. Jennifer Wyness will be working together to find out more about the turnover rates and looking into concerns about women leaving city hall.

Wyness said she has heard from some women at the city that they have concerns about their jobs but aren’t comfortable bringing them forward.

“When you hear stuff and their stories are indicative of an issue, you have to just keep digging to get to the root of it in a massive organization like the city,” said Wyness, who represents Ward 2.

In a statement to Postmedia, city officials said there is a relatively low permanent employee turnover rate and it is actively monitored against other municipalities through the Municipal Benchmarking Network Canada. According to this data, the City of Calgary has the second-lowest voluntary turnover rate among 16 other Canadian municipalities, including Toronto and Winnipeg.

“The City of Calgary strives to create a safe and inclusive work environment where everyone feels valued and respected,” the statement said.

“We recognize the value of gender equity and diversity in our workplace. We work intentionally to remove barriers for women and other underrepresented groups.”

During a presentation to council in April, city manager David Duckworth said the high number of 2021 resignations and retirements was largely driven by the end of the city’s retirement allowance.

The previous council voted in 2019 to scrap a 50-plus-year-old allowance for retiring employees no sooner than Dec. 31, 2021. Duckworth said many left because of the removal of that allowance, but noted that some have also said city salaries are no longer competitive with the private sector.

The average number of annual retirements from 2017 to 2020 was 350, while 2021 saw 608 retirements. The city says the number of retirements has slowed during the first few months of 2022 to below previous levels.

The city said in the statement that the 2022 voluntary turnover rate is on pace to be much lower than in 2021 for both men and women.

“Voluntary turnover for senior leaders is also relatively low and doesn’t show a significant difference between men and women,” the city said.

The data from the city was up to date as of March 31, and included the city manager, general managers, directors and managers in the senior leader data. It showed a zero per cent turnover rate among senior leadership for the first quarter of 2022.

At the level just below management, there have been four resignations — two men and two women — between Jan. 1 and April 14, 2022, according to the city’s statement.

The city added that promotion rates are increasing, with women having been promoted this year at a rate of 2.6 per cent and men at 1.8 per cent. In 2021, this was 1.1 per cent for women and 1.2 per cent for men.