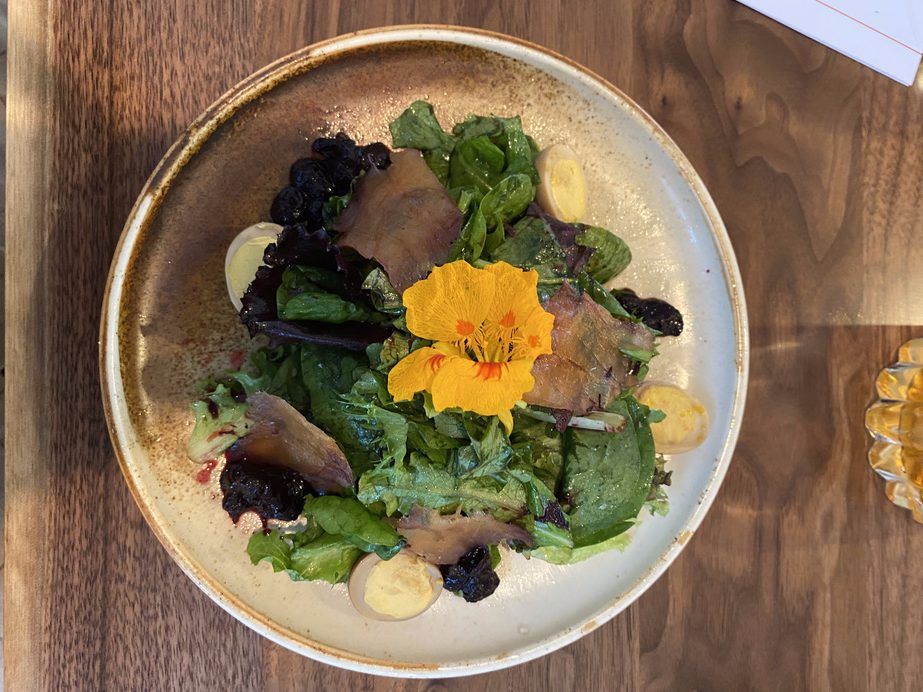 Banff has perhaps been a bit slower than Calgary in its adoption of an “eat local” philosophy, but over the last few years many chain restaurants on the main drag have given way to more regional fare, and longer-running independent restaurants are moving to create memorable food that evokes a taste of the natural surroundings. Along with the growing juggernaut that is the Banff Hospitality Collective and the collection of restaurants at the Banff Springs Hotel, Pursuit, the global tourism company that grew out of Brewsters, has been leading the charge when it comes to developing a distinctive Rocky Mountain cuisine.

It’s rare for a company that trades in glacier tours and FlyOver rides to prioritize positioning itself as a serious restaurant contender, but with two just-launched Rocky Mountain restaurants, Pursuit is proving that it’s not interested in hustling tourists down well-trodden culinary paths. The company’s latest Banff restaurant is Brazen, taking over the space in the Mount Royal Hotel that was previously occupied by an increasingly out-of-place Tony Roma. Brazen follows the openings of Pursuit’s Sky Bistro at the top of the Banff Gondola and Farm and Fire in the Elk and Avenue Hotel, both also overseen by Scott Hergott, the very capable executive chef of the company’s Banff and Jasper Collection. Like those other restaurants, the focus is on producing an excellent mountain experience for locals and tourists. Brazen’s theme is a “mavericks of the Wild West” affair, as expressed by a classy, leather-accented dining room with a dash of Jazz Age flair.

“Brazen pays homage to the history of the Mount Royal Hotel and the lounge and restaurant that was originally here, the Alberta Bar,” says Philip Slawsky, senior director of food and beverage for Pursuit’s Banff and Jasper Collection. “It was a saloon-style bar and a gathering place for locals, pioneers and trappers who were travelling through the area. It reflected the time and the people, who were very confident and a little defiant.”

Don’t be mistaken – Brazen pays homage to the spirit of those colourful characters of the past but it’s not a rough ’n’ tumble tavern by any means. Hergott and the restaurant’s chef Dan Jiricka have created a distinctively beefy menu on both a literal and figurative level. Menu highlights include tasty bar snacks like savoury peanut mix with double-smoked bacon and chicharrones ($9) and chicken “pops” drenched in a sweet and spicy patis glaze with a touch of gold leaf for extra glam ($15), with the rest of the menu consisting of shareable plates both large and small, including an ultra-flavourful smoked beef tartare made with cognac, pickled onion, and truffle oil ($22), mussels bathed in fragrant matcha green tea broth ($30), and a luxurious version of classic Calgary-born ginger beef made with slightly crusted Angus beef hanger steak and flavoured with a ginger syrup ($28).

Brazen is located in the Mount Royal Hotel at 138 Banff Ave. and can be reached at 403-760-8540 or banffjaspercollection.com/dining/brazen. The restaurant is open daily for breakfast, lunch and dinner.

Pursuit’s other new restaurant is further afield, in Jasper at The Crimson Hotel. Terra is just as well-conceived as Brazen but with a lighter, more contemporary look and a farm-to-table concept. Terra is designed to showcase a taste of local bounty, again, a concept that is all the rage in the city but has taken a bit longer to catch hold in the Jasper market, where deliveries from local farms are a trickier proposition.

In contrast to Brazen’s bold and indulgent menu, chef Tyler Tays’ vision for Terra hinges on fresh and bright ingredients and flavours. This is where you’ll find things like fried green tomatoes with farmers’ cheese and a pungent ramp pistou ($12), spicy corn “ribs” shaved off of ears of juicy Taber corn ($15), an impressively plated whole Alberta-caught trout served on a sharing platter with fiddleheads, wild rice, and brown butter ($60), and ember-hung duck with rose hip and red clover blossom ($37). The origin of each dish is listed on the menu so that guests explicitly know where their food is coming from – complementing the restaurant’s name which, of course, is a reference to the earth and soil.

Unsurprisingly, the drinks at Terra are just as inspired as those at Brazen and also formulated to match the concept of the restaurant, with lots of local spirits behind the bar and flavours like rhubarb, juniper berries, blackberries and fresh mint creeping into the cocktails.

Terra is open daily for breakfast and dinner and is located in Jasper at 200 Connaught Drive. For more information, visit banffjaspercollection.com/dining/terra.