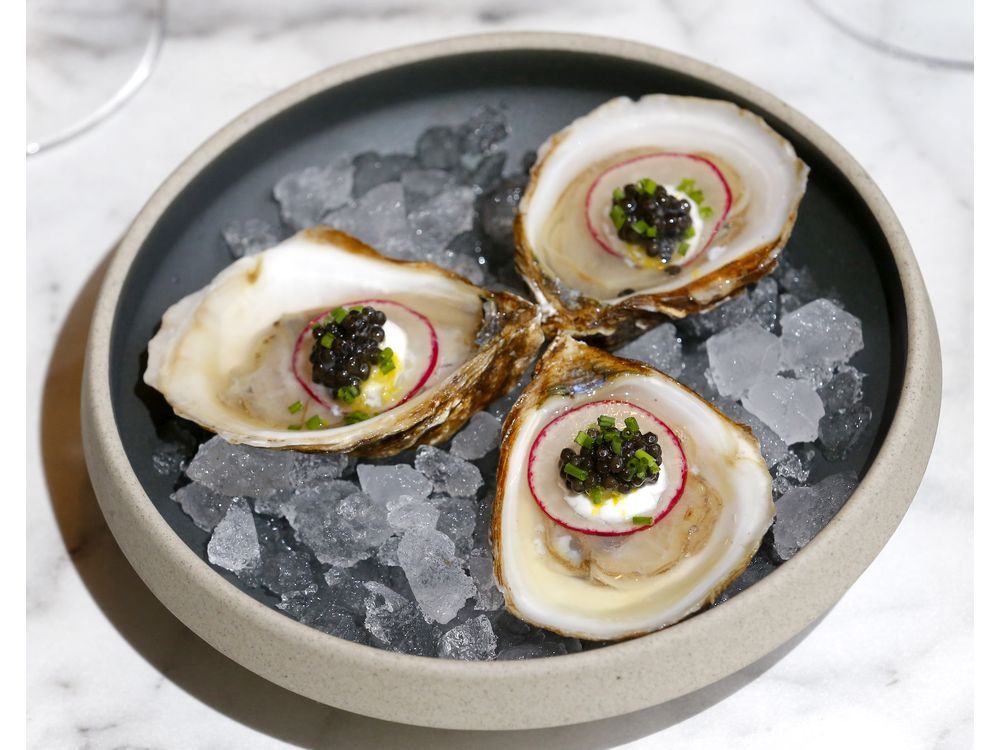 No one can accuse Mike Pigot of not being a hard worker. Probably best known for his time working with the Craft Beer Market and Home and Away sports bar, the affable chef has spent the pandemic as a consultant and a private chef. He founded Pigot’s Burger Club ghost kitchen and the Pasta La Mano artisanal pasta start-up, and just generally has been creating the fun and comforting food that we all need in troubling times. Pigot seemed to be everywhere in 2020 and 2021 — everywhere, that is, but in a restaurant of his own.

While a physical restaurant is hardly a necessity for a working chef in this wild and wacky era, Pigot was itching to start a project that really reflected the food that he loves the most. He and his fellow managing partner James Martin ushered in 2022 with the opening of their new restaurant Pat and Betty, a “contemporary dinette and bar” named after their respective mothers. It represents the next chapter in Pigot’s story of surprising and impressing Calgarians with undeniably delicious food.

Pat and Betty lives on the increasingly food-driven block of First Street S.W. that is also home to A1 Cafe and Ten Foot Henry — its particular unit used to be the Habitat night club, but many Calgarians will best remember it as the Castle Pub. Fort Architecture worked with Pigot (who personally collected the eclectic artwork in the restaurant) and Martin to create an atmosphere that feels immediately special without being stuffy. The seating area extends to a little second-floor mezzanine for a total of about 75 seats.

The room is designed to match the food, which is inspired by the titular Pat and Betty and their respective Acadian and British backgrounds, as well as Pigot’s love of the food scenes in cities like Montreal and his respect for high end ingredients. He comes out swinging with a small section of oysters (sourced by his friends at Rodney’s Oyster House) and caviar, with selections ranging from baked oysters ($12.50 for two) to an extravagant caviar service with 30 grams of caviar and appropriate accoutrements ($225). Pigot also brings in his other business Pasta La Mano to take care of an assortment of pasta dishes ($19 to $26), but the best way to eat at Pat and Betty is to start off with some country beef tartare on Yann Haute Patisserie brioche ($24) or burrata cheese on East End Bread sourdough ($19.50) and follow it with a plate of pork belly and scallops with truffle and foie potatoes ($39.50) or a 48-hour brined pork chop ($39) and a side or two of vegetables, ending with the must-try lemon pudding ($10). It’s rich and indulgent food, absolutely, but it’s also not intended for everyday meals and is unlike any other current restaurant in Calgary.

Pigot has taken a hiatus from his other projects and is the lead in the kitchen, cooking alongside his team almost every day. Even though he knows that he’s made a name developing delicious versions of more casual fare, he’s excited to show off his finer dining chops.

“People who are in my circle and would come over for dinner know that this is in my wheelhouse. But there was always that fear factor of actually doing it and the financial commitment is a huge leap,” he says. “I really wanted to create something like you see in bigger cities that have all of these small spots that have a really good feel to them but are sometimes underestimated when it comes to the food.”

Naturally, drinks are also a concern and while Pat and Betty does have a small list of house cocktails, the emphasis is on the wine list, which has a focus on European wine with a few North American bottles thrown in.

Pat and Betty is located at 1217 1st St. S.W. and can be reached at 403-453-7690 or patandbetty.com. The restaurant is open Tuesdays through Sundays from 3 p.m. to 11 p.m. It has already proven to be immensely popular, so reservations are recommended. Tables are reserved for two-hour slots but the restaurant can accommodate longer reservations if requested in advance.

In other restaurant news, a new Calgary-based start-up is trying to reduce the waste from all of those takeout boxes we’ve grown used to with a reusable container system called Earthware. To participate, customers can sign up as members at the Earthware website and then let participating restaurants know that they’d like their food packaged in one of the company’s containers when ordering food. The containers are later collected, washed, and redistributed to the restaurants. The company’s aim is to keep a million single-use containers from heading to the landfill over the course of the next year.

Restaurants are still signing up to participate in the service, but current vendors include The Coup, Donna Mac, Bonterra and Wonton King. For more information or to sign up, visit earthware.me.