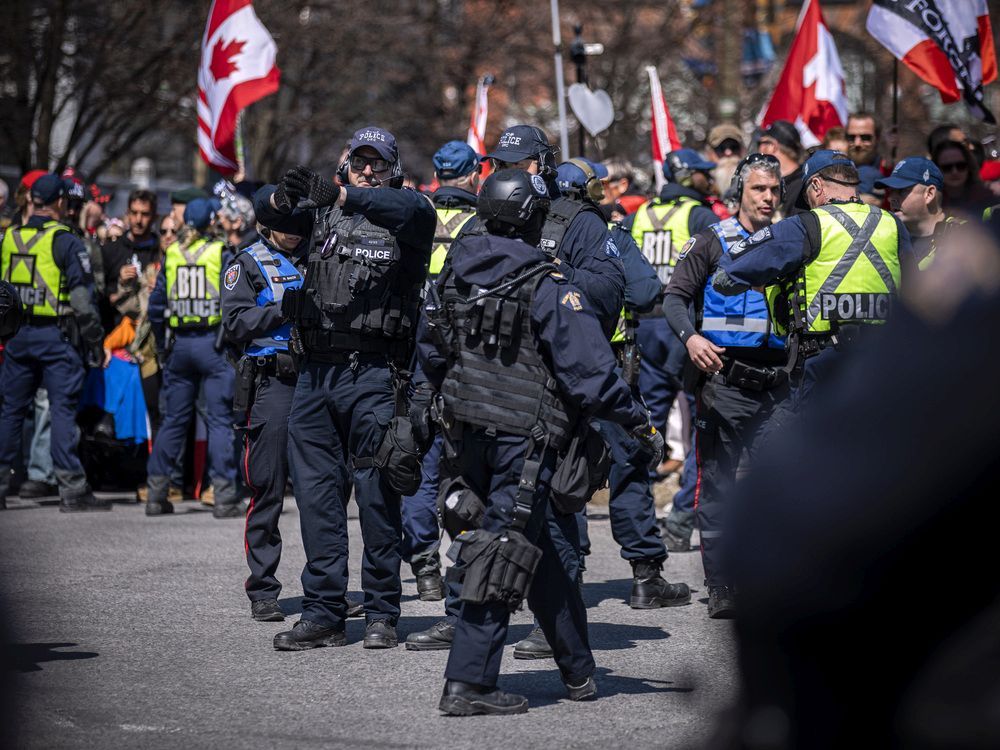 Acting chief Steve Bell said he had seen some in the crowd acting with hostility towards some of the police officers.

The chief of the Ottawa Police Service said on Saturday that the police operation to oversee “Rolling Thunder” events in downtown Ottawa would continue until all rally attendees were gone.

“This isn’t over yet,” said Steve Bell, the acting chief of the police service. “We will maintain our posture in the area, we will maintain our presence today and tomorrow until there’s nobody left involved in this down there. That’s when our operation will end.”

The police operation downtown featured hundreds of officers from a variety of police services. They oversaw a large crowd gathered for Saturday’s ceremony at the National War Memorial, and police escorted four waves of bikers through the area for a brief appearance before whisking them out again.

Bell, who was downtown earlier Saturday, said he had seen some in the crowd acting with hostility towards some of the police officers. Some in the crowd had wanted the bikers to be allowed closer to the war memorial.

“Our members have been extremely professional in managing this,” he said. “They’ve had to put up with some pretty disrespectful and unacceptable behaviour towards them, but they continue to show their professionalism as they execute their plan and as they do their jobs.”

Seven people wee arrested Friday night, when a crowd at the intersection of Sussex Drive and Rideau Street clashed with police. Some elements of that crowd had been trying to park vehicles near the downtown area to replicate elements of the “Freedom Convoy” protest that became an occupation of part of the downtown core in January and February.

“We have always said since the beginning of the week, come to Ottawa, that’s fine, but do it in a respectful way to the citizens of our city, do it in a lawful way that you’re not breaking any laws, whether it’s bylaw, highway traffic act, criminal offences, and we’ll be fine,” Bell said. “The people that have not heeded that warning and have engaged in unlawful activity have seen that we were true to our word and have the response and have been on the recipient end of enforcement action.”

The crowd was generally cooperative on Saturday, Bell said, but there were two additional arrests by the middle of the afternoon.

So far, Bell said, events had gone according to police plans.

“Our residents are tired of people coming into our city and causing disruption in it,” Bell added. “The plans we have developed have been around making sure that our citizens have the ability to move around unfettered in our streets and have the ability to not be treated in a disrespectful manner, like we have seen from these groups in the past.”