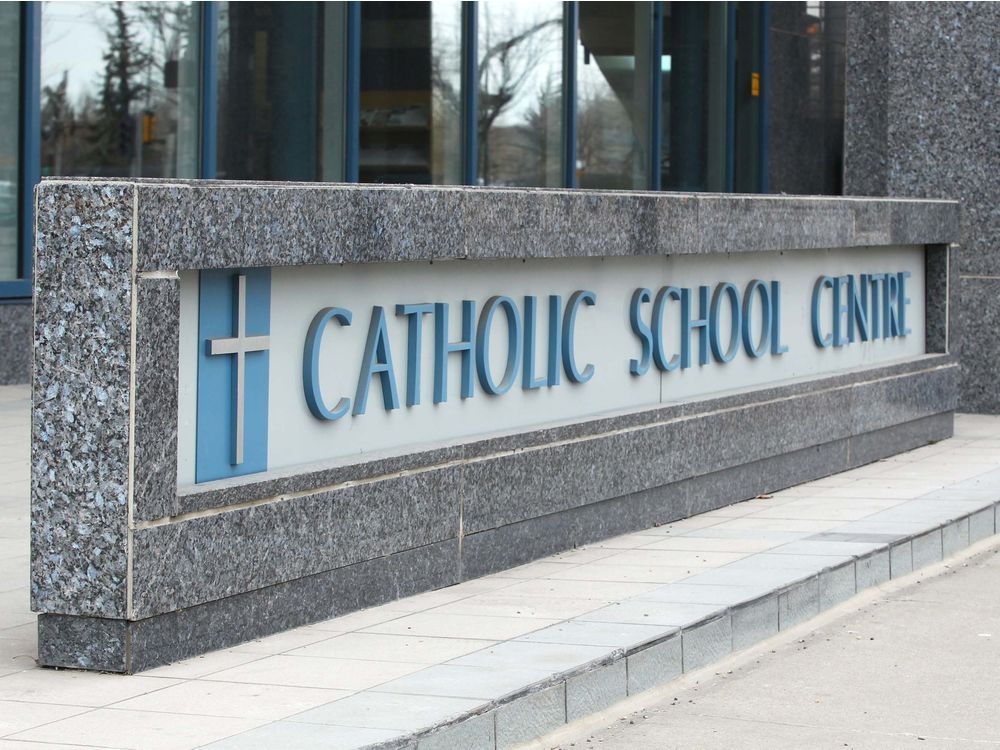 In just one year, the West Calgary High School has moved from No. 5 on the capital wish list down to No. 9, with the new Rangeview High School in the southeast now ahead of it at No. 8, according to the Calgary Catholic School District’s latest three-year capital plan.

Parents with the West Calgary High School Advocacy Group say the four-point drop was done without consultation, and now forces Catholic students living in the expanding communities of Springbank Hill, Aspen, West Springs and Cougar Ridge to decide between two difficult options for grades 10 to 12 in the coming years.

They can take public transit — commuting over an hour each way — to St. Mary’s High School downtown, or they can attend Ernest Manning, ending their Catholic education at an overcapacity public high school.

“More and more of our families are going to public high schools, yet we are still doing the sacraments, it is who we are, it is our roots,” said Stephanie Doucet, who has two boys, one now in junior high school.

Doucet is also part of the more than 450 parents now representing the West Calgary High School Advocacy Group, which has been pushing for a new high school in the area for years.

“To see our high school keep getting moved down so much as a priority — without any consultation from parents — is just not right,” said Krista Li, who also sits on the advocacy group and whose eldest daughter is in Grade 6.

“I don’t want my daughter commuting on public transit for an hour each way when she’s in high school.

“But I also don’t want her to end her Catholic education. And we know that Ernest Manning is bursting at the seams,” Li said.

“This board seems to rely on that, that Catholics can just attend the nearest public high school in their area. So we’re seeing a slow burnout of the importance of Catholic education in this city, in this province.”

Cathie Williams, chair of the CCSD board of trustees, says the need for a high school is much higher in the deep south where growth rates are over 20 per cent compared to West Calgary, where the growth rate is only four per cent.

“In terms of our capital plan, things will move up and down and change in terms of priority, depending on the different growth trends we are seeing.”

Williams said high school needs are not the only challenges that CCSD is facing given the sliver of capital funding it received in the UCP government’s Budget 2022.

The district received funding for one new elementary-junior high this year after receiving no new schools last year, keeping it well behind meeting many urgent needs for new infrastructure and modernizations.

According to CCSD data tracking capital funding per student in Alberta over the past seven years, CCSD continues to receive among the lowest amount of funding compared to other big city school districts.

When averaging per-student capital funding for all four metro school boards between 2013 and 2020, CCSD received only $6,997 per student compared to Edmonton Catholic School District, which gets $10,051 per student, and Edmonton Public School Board at $8,255. The Calgary Board of Education receives the lowest at $6,586 per student.

Last week, Education Minister Adriana LaGrange announced funding for the $27-million Legacy Elementary and Junior High School in the city’s farthest southern community where many students are now travelling more than 45 minutes by bus to get to other schools.

Still, nearly $107 million in new schools and modernizations prioritized in the first year of the CCSD three-year capital plan were ignored by the province.

“There used to be a sector formula that served districts well. Since then, it would appear that decisions have been made more on a political basis than on a needs basis.”

Critics have questioned the politics around significant funding amounts recently announced for rural and central Alberta projects in the run-up to Premier Jason Kenney’s leadership review set for early April.

In recent weeks, the UCP announced a $1.8-billion expansion of Red Deer Hospital and a $13.7-million investment to a small school in Acme, about an hour northwest of Calgary with about 200 students.

At the Acme announcement, LaGrange said the province took many factors into consideration when doling out up to $2 billion in capital funding for the 15 projects chosen among 400 applications.