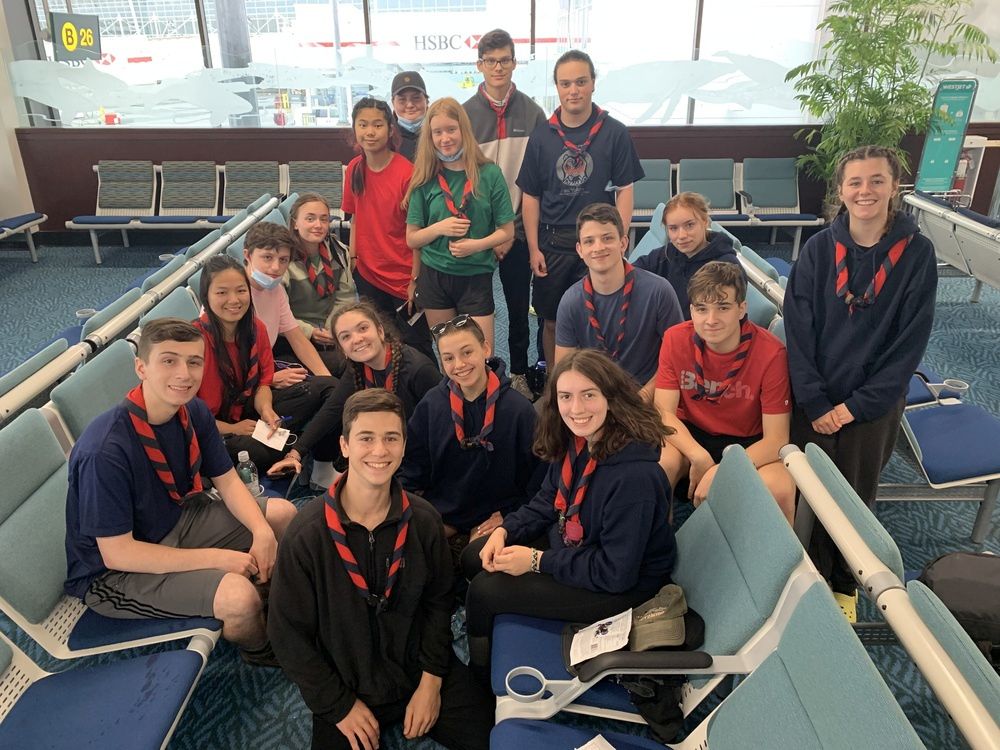 A scout group of 20 teenagers and two adult leaders heading from Quebec to a long-planned, camping trip in the Yukon got caught in Vancouver as Air Canada started a massive cancelling of summer flights.

Instead of arriving in Whitehorse on Saturday, they rolled out sleeping bags to crash overnight on the floor at YVR’s Gate B26 after their flight was first delayed and then cancelled following their connecting flight through Toronto from Quebec City.

They thought there would be a flight on Sunday, but woke up to find out there won’t be one until at least Wednesday evening.

“We didn’t sleep well so the energy level is a bit lower than it was yesterday, but we’re trying to keep a smile,” said 16-year-old Sophie Labrecque, who is part of the Poste Sagarmatha-Mahikan scout group.

Others on the trip like 14-year-old Ludovick St-Pierre were also helping to rally the group as adult organizers pressed Air Canada representatives for better options.

They were naturally hesitant to leave the airport without some reasonable, alternate plans.

After being unable to find flights to Calgary or Edmonton, they tried renting two vans even though it would mean a 28-hour drive from Vancouver to Whitehorse.

“We don’t want to take the chance of waiting three days for our flight and then it being postponed or cancelled,” said Labrecque of the reasoning.

Since their larger backpacks for the trip were checked in, they only had their carry-on bags.

“We had the idea of putting our sleeping bags into our little bags, so that was the best idea we got,” said St-Pierre.

The scout group plans and saves for making a big trip like this every three years. They had been dreaming of maybe making it to the Arctic Circle.

Air Canada gave them each vouchers for $10 per meal so they have been going back and forth to the Tim Hortons and the newsstand.

Last week, Air Canada CEO Michael Rousseau announced in an email to customers it will have to cancel more than 150 flights a day in July and August due to “unprecedented and unforeseen strains” in the global aviation industry.

“Despite detailed and careful planning, the largest and fastest scale of hiring in our history, as well as investments in aircraft and equipment, it is now clear that Air Canada’s operations too have been disrupted by the industry’s complex and unavoidable challenges,” said Rousseau.

It comes as airlines in Europe and the U.S. are also cancelling hundreds of flights just as people are eager to travel again after COVID-19 lockdowns kept them from going on vacation.

The teens were staying in touch with their families, who were keeping the uncertain situation in perspective.

The kids are happy to be on an adventure together and the parents have confidence in the group organizers, said Mathieu Robitaille and Rachel Corbeil, whose 16-year-old daughter Noemie is on the trip.

They were, however, irate at the initial nonchalance of Air Canada and are still concerned about the possibility of the group making it to Whitehorse only for return flights to be cancelled.

“They said everything was booked so they were unable to arrange anything more than getting them the permission to sleep at the airport,” said Robitaille. “How’s that for customer service premium!? What the hell can you do with $10 per meal in an airport?”

By Sunday afternoon, St-Pierre said they were unable to rent vans and Air Canada was offering to put the group up in a Vancouver hotel for the next few days. They will sightsee and return to YVR on Wednesday night. There was also talk of the possibility of a flight on Monday.

The group is slated to fly home to Quebec City from Whitehorse on Sunday, July 10.

“If our flight does not work, we are going to ask for a refund and go back to Quebec or ask to sleep in a hotel for the last days of our trip,” he added.