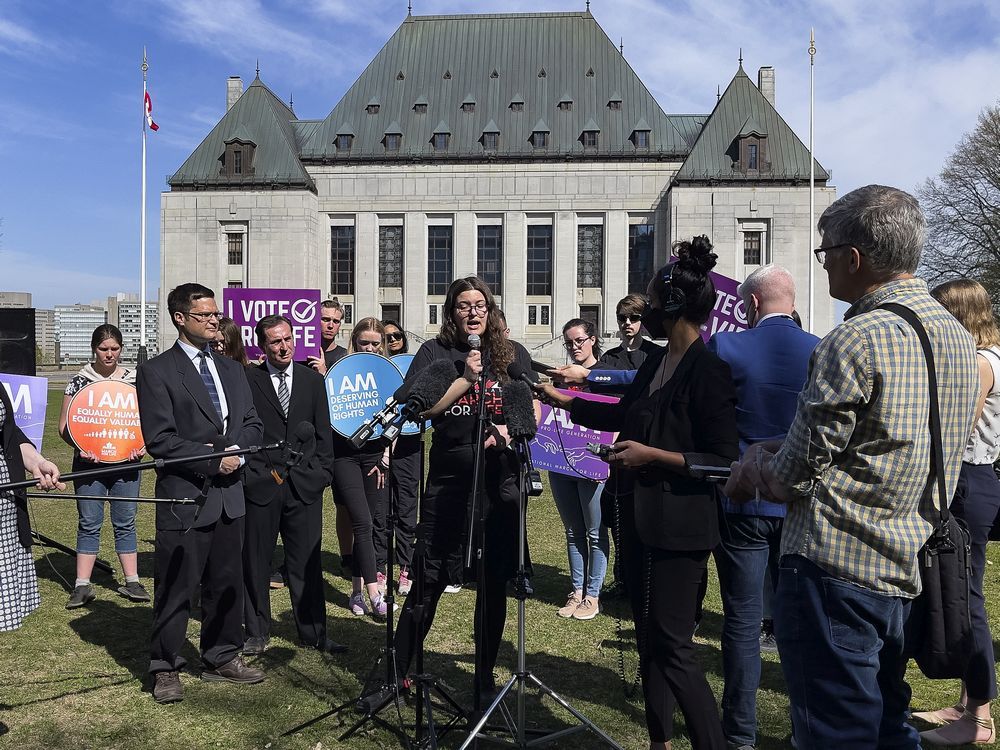 News that the U.S. Supreme Court appears poised to strike down the Roe v. Wade decision protecting abortion rights south of the border has given new life to Canada’s Campaign Life Coalition on the eve of its annual March for Life.

“We hope and we believe that the overturning of Roe v. Wade is a fulcrum, a tipping point,” Campaign Life Coalition political operation director Jack Fonseca told reporters outside Canada’s own Supreme Court Wednesday.

“We have a lot of work ahead of us, but the overturning of Roe v. Wade will help us toward that goal because it will enable Canadians to have kitchen table conversations about the humanity of the unborn child, about the right to life and why the Canadian situation is so different from what we see with our friends and neighbours just to the south of us.”

Thursday marks the 25th anniversary of the Right to Life March, which in past years has drawn more than 10,000 people to Parliament Hill. Organizers expect about 3,000 this year, the first in-person event after two years of the COVID-19 pandemic.

A counter “Rally for Choice” is also planned for the same time, gathering across Wellington Street from Parliament Hill. Planned Parenthood will be on hand distributing its own information on abortion access, crisis pregnancy centres, condoms and safer sex advice.

Jaisie Walker, executive director of Planned Parenthood Ottawa, said the situation in the U.S. is further polarizing the debate on abortion.

“In our organization, in the last few weeks we’ve seen a massive increase in support,” Walker said, adding access to abortion remains a problem in Canada.

“We’re constantly seeing people who don’t understand their rights and health care providers not having the resources, the training and education to ensure routine procedures like abortion are ensured in the community.”

Ottawa police said the demonstrators will march from Parliament Hill through the downtown core and commuters can expect to encounter rolling road blocks between 1:30 and 3 p.m.

Fonseca called Prime Minister Justin Trudeau an “abortion extremist” for his support of abortion rights and said that of the six people vying for the leadership of the federal Conservatives, only Haldimand—Norfolk MP Leslyn Lewis has taken a strong anti-abortion stance.

Coalition Life acknowledged there’s is an uphill battle, requiring a shift in public opinion, as well as winning over the majority of MPs, senators and Supreme Court justices.

“We are aware that we are in the minority. It doesn’t mean we’re wrong,” said Josie Luetke, the coalition’s youth co-ordinator.

Asked if the coalition favours a blanket ban on all abortions, even in cases of rape or incest, Luetke said it does.

“I have great compassion for a woman in a crisis pregnancy, especially one who conceived via rape,” she said. “But ultimately, having an abortion is not going to un-rape that woman. It’s not going to erase her child. It’s just going to make her the mother of a dead child. So in addition to the trauma of rape, she’ll have to deal with the trauma of having killed her own child.”

Abortions have been legal in Canada since 1969 —  the coalition called it “Canada’s day of infamy” — when the Criminal Code was amended to include therapeutic abortions approved by a committee of doctors who agreed the pregnancy put the mother’s life at risk  In its 1988 landmark ruling on the case of Dr. Henry Morgentaler, the Supreme Court struck down that law as un-constitutional because it limited women’s access to abortion.

Meanwhile, the federal government said Wednesday it is giving $3.5 million for two projects to help improve access to abortion services in Canada. The funding stems from a year-old budget pledge to spend $45 million over three years to help organizations make sexual and reproductive information and services more available.

Action Canada will use the federal money to expand programs that provide accurate information about sexual and reproductive health and referrals, as well as help cover women’s travel and accommodation costs. The National Abortion Federation will use funding to give women seeking abortion services financial and logistical help, as well as train health-care providers in providing those services.