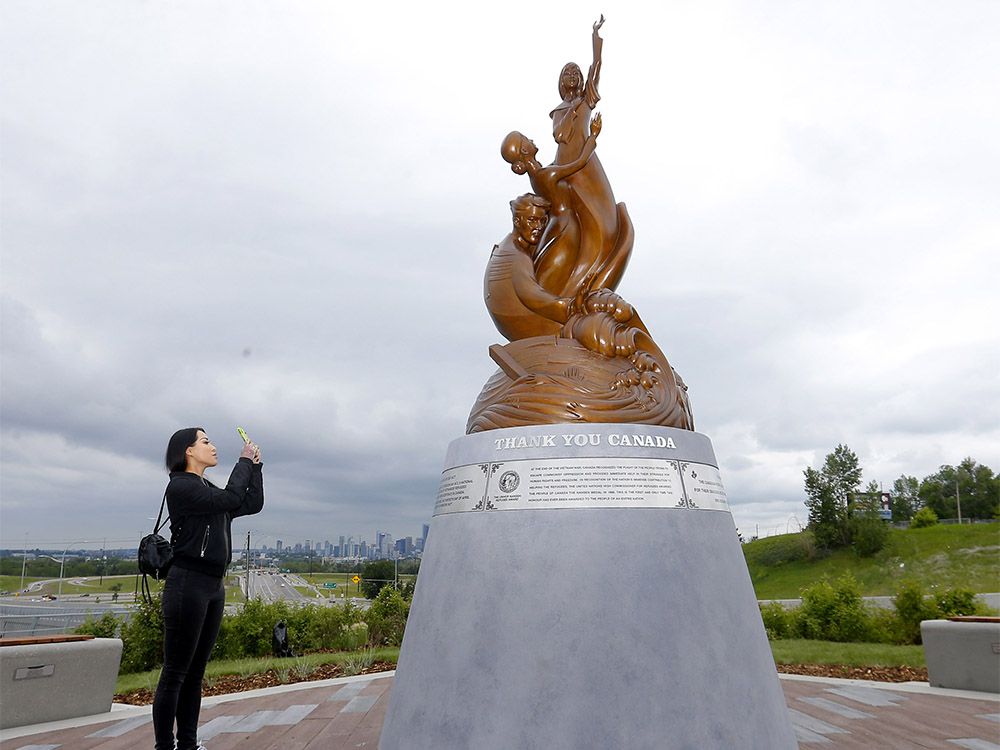 A new park and monument in Calgary are honouring the people who lost their lives escaping Vietnam after the fall of Saigon and those who successfully rebuilt their lives in Canada.

Hundreds of Vietnamese Calgarians, as well as community and government representatives, attended a ceremony officially unveiling Journey to Freedom Park at the end of International Avenue in Forest Lawn on Friday. The monument is meant as a thank-you to Canadians and Calgarians who opened their doors to Vietnamese refugees during the migrant crisis that ensued after the end of the Vietnam War.

Often referred to as the “Vietnamese boat people,” approximately 840,000 people fled the country in the years after North Vietnamese forces captured the South Vietnamese capital of Saigon in 1975, an event that marked the end of the Vietnam War and the country’s reunification as the Socialist Republic of Vietnam. According to United Nations estimates, about 250,000 people died during the crisis, which peaked in the late ’70s and continued through the early ’90s.

“Thousands and thousands of them died on the sea; (they) were kidnapped or murdered,” said Anne-Marie Pham, a spokeswoman for the Calgary Vietnamese Canadian Association. “Many ended up in refugee camps in Indonesia, the Philippines, Malaysia, Hong Kong — and waited there sometimes for years before a country would welcome them.”

Countries across the globe took in Vietnamese refugees, with about 60,000 coming to Canada. As of the 2016 census, Canada had more than 240,000 citizens of Vietnamese descent, more than 20,000 of them in Calgary.

“The vast majority of Canadians of Vietnamese heritage are actually boat people or the children of boat people,” said Pham. “That’s why I think there’s so much energy and momentum and gratitude in the Vietnamese community in Canada for the new opportunities for them to make a living and make a new life in Canada.”

UN High Commissioner for Refugees recognized Canadians in 1986 for their efforts to help refugees, honouring the “people of Canada” as a whole with the Nansen Refugee Award, marking the first time the award was presented to an entire nation. The monument also pays tribute to that designation.

Premier Jason Kenney was at Friday’s ceremony. He said it was a “touching” moment for him, having previously worked to pass legislation both provincially and federally to ratify Journey to Freedom Day, which occurs annually on April 30.

“Those who fled communist oppression have gone on to make an enormous contribution to Canada,” Kenney tweeted.

The Calgary Vietnamese Canada Association raised $1.2 million to build the park, a bit short of its $1.5-million goal due to fundraising complications caused by the COVID-19 pandemic. Pham said at the event on Friday that Kenney promised the government would kick in $300,000 to make up the difference.

Honoured to inaugurate Calgary’s Journey to Freedom Park, unveiling the monument commemorating the inspiring story of the Vietnamese Boat People who found refuge in Canada 40+ years ago.

Those who fled Communist oppression have gone on to make an enormous contribution to Canada pic.twitter.com/HyN3uWT4wh