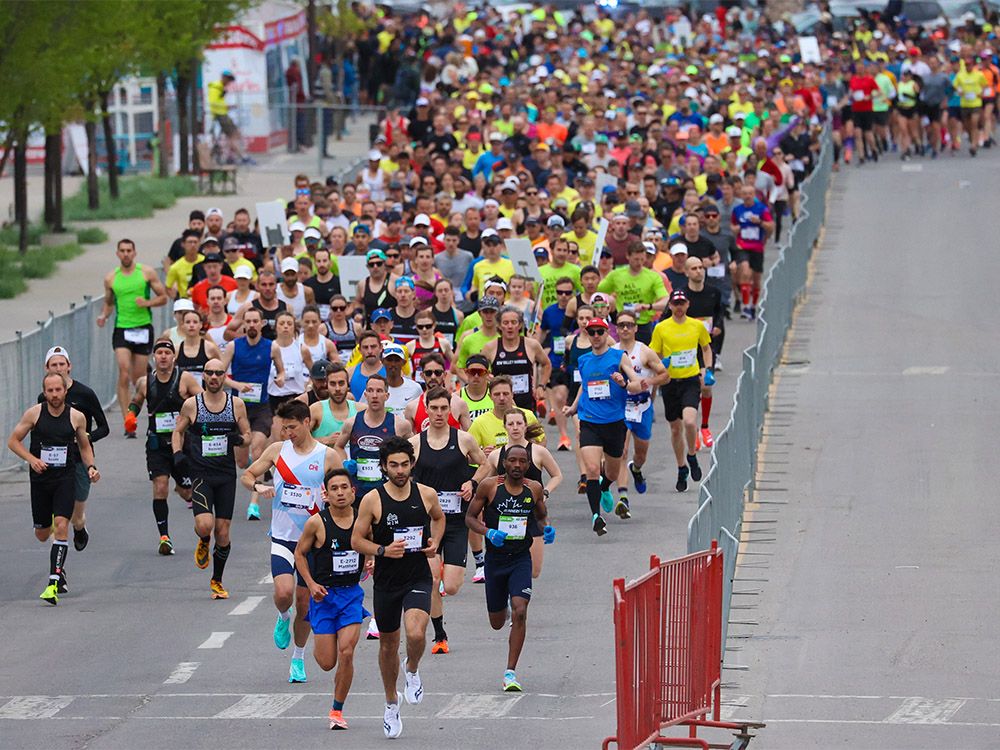 Thousands of runners from across Canada took part in the return of the Calgary Marathon this weekend, setting off from Stampede Park early Sunday morning for the first full-scale event in almost three years.

“It’s just so awesome to be back,” said Kirsten Fleming, the marathon’s executive director. “Seeing the faces and the smiles and the expressions of people joyfully finishing a race and hugging and high-fiving after 2½ years of social distancing.”

The group organized a scaled-down race in September 2021 but had to nix a few of the usual on-route sights like live music and host a smaller roster of runners due to health restrictions at the time. In 2020, the event was cancelled entirely due to the COVID-19 pandemic. This year, while not quite back in full swing compared to pre-pandemic events, more than 6,000 runners competed in races ranging from five to 50 kilometres.

“I did a couple of virtual ones during COVID, but I hadn’t been in a race since prior to COVID. It was nice to race in 3D again with all these people,” said John Deausy, who ran the 5K race with his wife.

“The energy is way different, probably a way faster time than in a virtual race just because you get into it. It’s nice to interact with people again.”

Father-and-son duo Scott and Dane Logan also ran the 5K together, for the most part. After running in separate races during last year’s event, the father said he wanted to give his son “a bit of a challenge.”

“He dusted me,” said Scott of his son’s 18:27 — a full 50 seconds faster than his old man. Dane took first place in the 10 to 14 age group and placed fourth out of the more than 900 participants in the 5K. Scott followed shortly behind his son at eighth overall, also notching first in his age group, 45 to 49.

Medal-adorned runners poured out of the Calgary Stampede Grandstand throughout the afternoon, limping with sore limbs healing from a lengthy contest. Most were happy with their feat, notching new personal bests and some first-time completions.

But for the medals themselves, it was a nail-biting finish — one aided by the efforts of several international organizations.

Marathon organizers alerted participants Tuesday that medals likely wouldn’t arrive in time for the Sunday race. They’d ordered their medals weeks earlier than usual, but port backlogs saw them stuck on a ship on the shores off Vancouver for more than a month.

Shipping terminal officials initially told organizers there was a less than one per cent chance the medals would make it off the vessel, through customs and to Calgary by the weekend.

But then came what Fleming called a “medal miracle” and a race in and of itself.

“But once we knew what was happening and where the container was, we did everything in our control to make it happen. The vessel ops group strategically planned the unloading of this ship in a way to ensure it was prioritized and everyone from the terminal VP to the team worked to get the container off early Saturday morning.”

Oregon-based medal broker Leslie Jordan and Vancouver truck company CTC worked together to push the medals through customs and a sorting facility that’s typically closed on Saturdays. With less than 12 hours before the starter pistol fired, they tapped WestJet, putting the medals on the last Saturday night flight to Calgary from Vancouver.

“When the opportunity presented itself to help expedite the arrival of the Calgary Marathon medals, we wanted to do anything possible to ensure participants had medals to celebrate with at the finish line,” said WestJet spokesperson Morgan Bell.

Just six hours before the race started, at 1 a.m. Sunday, Fleming and other marathon volunteers picked up the medals at Calgary International Airport and delivered them to the finish line at Stampede Park — just six hours before runners were scheduled to set off.

“We had two hours of sleep and came back to get the race going this morning,” Fleming said.

The Calgary Marathon helped raise more than $300,000 for its 73 charity partners through the 2022 event — and donations are still rolling in. Throughout the history of the event, organizers say they’ve raised over $9 million for local charities.