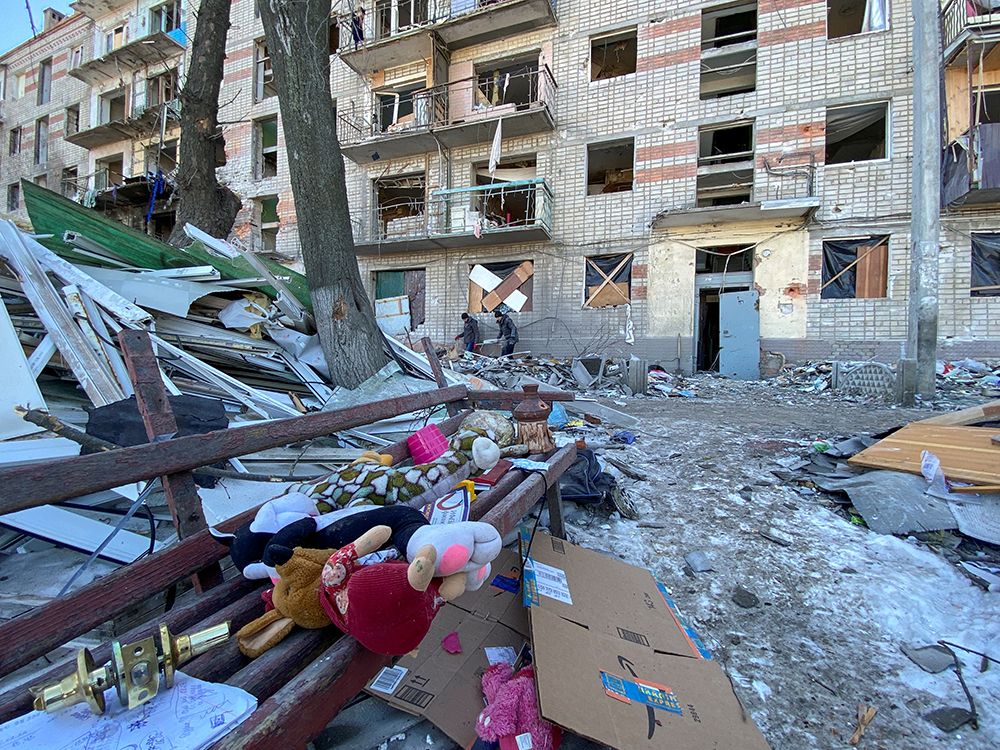 It was Thursday night in Lviv, Ukraine, and Paul Hughes was expecting another load of young refugees fleeing a rocket-ravaged part of the country.

“We’ve got a new group from Kharkiv . . . It’s pretty intense for everybody,” said Hughes, referring to the eastern Ukrainian city that has been under nearly constant Russian attack for a month.

“No van comes back empty.”

It was the latest mission run by Calgary-based charity Helping Ukraine-Grassroots Support (HUGS), whose three blue vans marked by the group’s stickers venture into war zones of the country’s north and east to ferry refugees to the relative safety of Lviv far to the west.

“Those vans are going into the hot zones of Kyiv and Kharkiv, we’re getting kids out,” said Hughes, who arrived in Lviv from Calgary three weeks ago.

But the reward at the Lviv end of the refugees’ journey, he said, makes the danger and risk worthwhile.

The sight of youngsters pouring out of the vans, often without their parents but still in high spirits, is inspiring, said Hughes.

“Those kids are really tough.”

The Princess Patricia’s Canadian Light Infantry veteran hasn’t gone into the thick of the danger yet and has instead been co-ordinating the group’s humanitarian efforts in Lviv, which is swollen with hundreds of thousands of Ukrainians who’ve fled the fighting.

Those HUGS personnel who do go into areas under Russian attack — an international cast of volunteers — do what they can to appear non-combatant, said the Calgarian.

“We work under protocols — you cannot look military and we wear the cheesiest civilian stuff we can,” said Hughes, who is well aware of the Russians’ penchant for attacking civilians.

And with the war at a stalemate, there’s concern those rescuing civilians and even the refugee hub of Lviv could be caught in a Russian escalation of the fighting in a bid to break the impasse — namely chemical warfare, he said.

“I’m worried about that stuff, with the civilian population and children,” said Hughes.

“Who knows what (the Russians) will do?”

A week ago, an aircraft repair facility in Lviv came under Russian missile fire, setting the city on edge.

Preparations to defend the city and a corridor from the Polish border funnelling arms and foreign fighters are well-advanced, he said.

Ukrainian and western officials also fear Russian ally Belarus will enter the war by attacking the country’s west to cut off those supply routes.

“They’re armed to the teeth here.”

Hughes said one Alberta military veteran he met in Lviv will soon be on his way back to the western Ukrainian city for a rest after being embroiled in the fighting in the Kyiv area.

“He says he’s taken out a few Russian tanks. It’s kind of a guerrilla warfare where they hit and run away,” said Hughes, who originally headed to Ukraine to join the fight.

“Every four hours they move, have a bit to eat, sleep.”

But instead, the 57-year-old said he’s found his calling organizing humanitarian aid bankrolled by a steady stream of Calgarians’ donations that have amounted to about $100,000 over three weeks.

It’s an effort that’s raised Calgary’s profile on the edge of the largest conflict in Europe since the Second World War, said Hughes.

“Calgary has a presence here, it’s going toe-to-toe with Putin,” he said.

“I should have brought some Calgary pins to hand out, and a few cowboy hats would have been nice.”