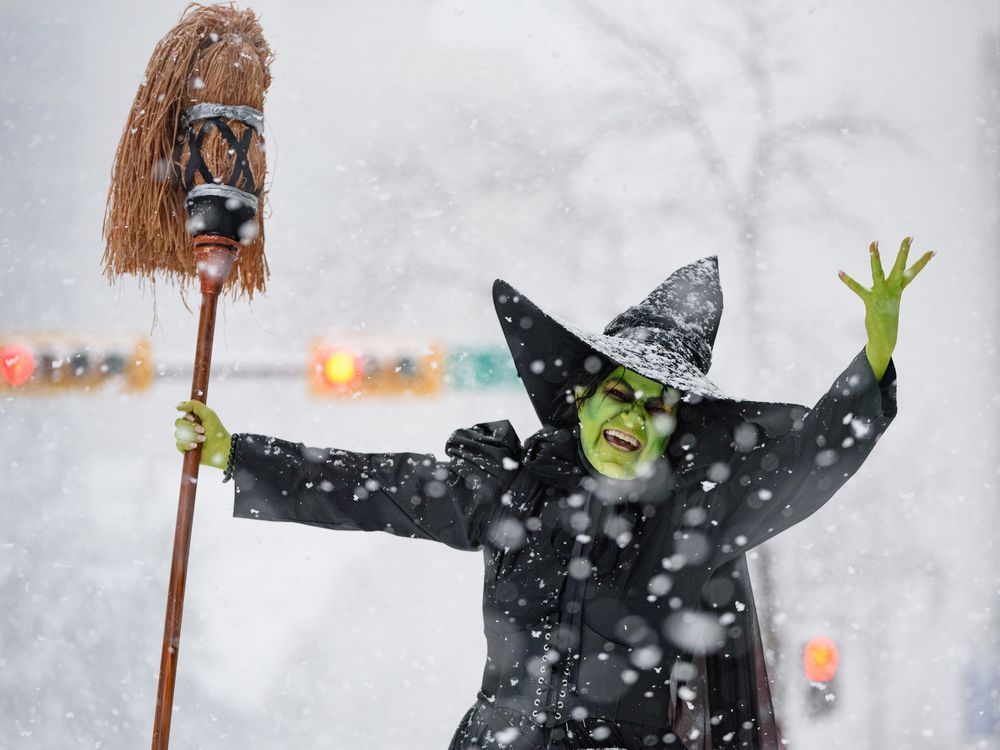 Mother Nature put a stop to Calgary Expo’s return to the downtown streets Friday morning, unleashing a snowstorm that caused organizers to cancel the highly anticipated Parade of Wonders less than half hour before it was set to begin.

Parts of 8th Avenue were already closed for staging, a marching band was ready to go, dozens of colourfully costumed participants huddled together on the corner and the honorary parade marshal, Mayor Jyoti Gondek, had even showed up with five of her staff elaborately costumed as characters from Alice In Wonderland.

But in the end, the weather was deemed too severe and the roads too slick to continue.

“We are so disappointed that Mother Nature was not a geeky as we are today and didn’t want us to have a parade,” said Calgary Expo spokeswoman Alex Kingcott. “But it’s a winter wonderland in April so we’re going to celebrate it with the geekiest dance party on the street you’ve ever seen.”

The hardier revellers stuck around to watch the stationary marching band perform a few songs and for an impromptu white-hatting ceremony by the mayor, who bestowed the Smithbilt on Calgary Expo’s very surprised parade organizer Allison Moore.

“I think we’re all disappointed that we didn’t get to be in a parade,” said Gondek, who was dressed as The White Rabbit from Alice in Wonderland and flanked by staff outfitted as Alice, the King and Queen of Hearts, The Cheshire Cat and the Mad Hatter. “But I think the more exciting thing is that we are all together and we’re celebrating.”

Most of the participants seemed to take the cancellation in stride. Clayton and Cindy Debeurs came in from Edmonton dressed as Klingons and suggested the snowy conditions reminded them of the Rura Penthe, a suitably geeky reference to the icy penal colony the Klingon Empire sent Captain Kirk and Dr. McCoy to in Star Trek 6: The Undiscovered Country.

Like all good Klingons, both were prepared to withstand any inclement weather.

“Not everybody is built for a parade in this weather, but we are,” Cindy said.

Calgary’s Cathy McLeod had been up since 6:30 a.m. fitting herself with prosthetics and green makeup to transform in the Wizard of Oz’s Wicked Witch of the West. It was one of the more impressive costumes on display Friday morning and had McLeod posing for photos.

She had rented a hotel room in downtown Calgary to “make a night of it” and ensure she got to the parade site early. Still, she didn’t seem too bummed out about the cancellation.

“Oh well, maybe I’ll go for breakfast and freak some people out,” she said.

This was to be the eighth Parade of Wonders at Calgary Expo and the first since 2019 due to the pandemic. Moore said this was the first time it had to be cancelled due to weather.

Organizing the annual march down Stephen Avenue is a Herculean task that Moore has been working on since September.

Highlights of this year’s parade included a gigantic, locally made sculpture of Bowser, a fire-breathing Kupa from Nintendo’s Super Mario franchise. He was to be accompanied by voice actor Charles Martinet, who voices Super Mario in the video games, in a red Ferarri.

“It’s been a long three years,” she said. “I think everyone is really excited to come here and celebrate together.”