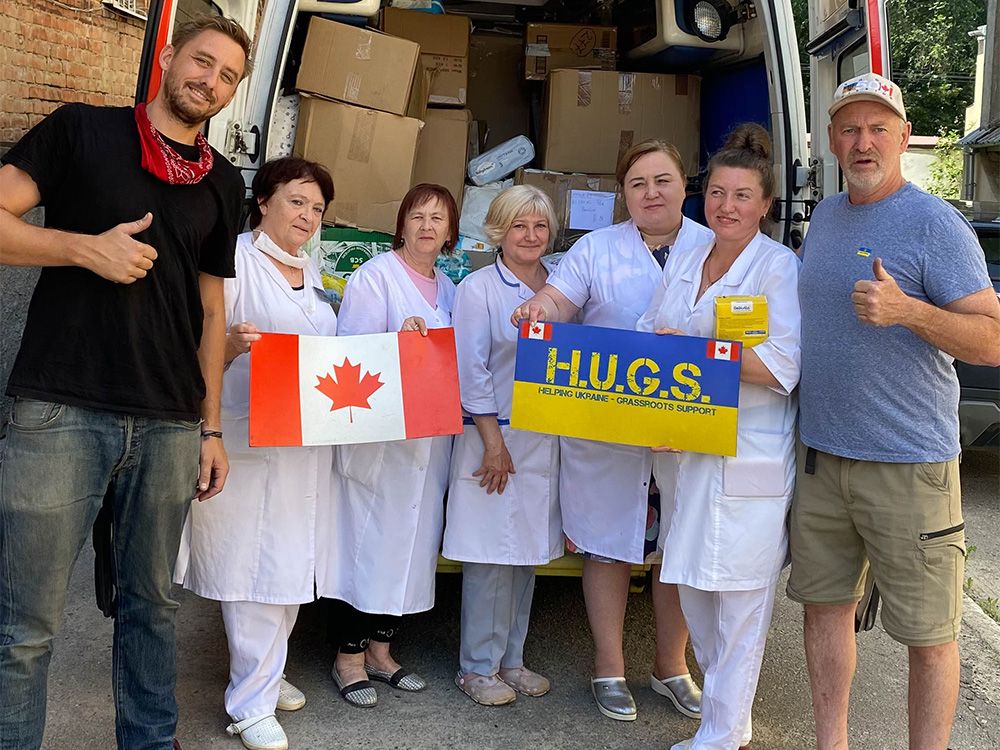 Calgarian Paul Hughes had just said his time spent this week in the war-ravaged city of Kharkiv had been uneventful.

“It’s been quiet since I got here. Only one siren so far,” said the Canadian military veteran early Friday morning Ukraine time.

Less than 30 minutes later, his outlook had changed as a volley of Russian missiles or shells rained down on the country’s second-largest city, which sits only 42 kilometres from the border separating the two countries.

A video he hastily posted shows the crimson tracers of a projectile streaking through the dark and the crunching thud of an impact.

“Spoke too soon. Bombs,” he stated moments after a series of detonations.

“One was quite close.”

Hughes counted 25 explosions striking the area in and around a city where he’s been delivering medical supplies and food to humans and hungry pets.

Though Ukrainian forces pushed Russian troops back from Kharkiv in the spring, the bombardment has renewed — as have fears Moscow’s soldiers might make another push for the city in the country’s East.

Kharkiv was one of the most fought-over cities in the Second World War, changing hands four times between the Soviet Army and the German Wehrmacht between 1941 and 1943.

So far, it’s been just outside the Russians’ grasp but not entirely out of their reach, as Hughes can attest.

“There’s so much bombing … there’s a really badly burned guy who we’re taking to a hospital in Kyiv,” he said.

“He was caught in one of the bombings — we really don’t know too much about it because language is still a huge barrier for us.”

Hughes said his latest forays took him within seven kilometres of Russian troops, whose presence has kept many Kharkiv residents within the refuge of the city’s underground metro system while preventing many others who’ve fled from returning.

“The city’s bigger than Calgary but it might be downtown Didsbury, it’s so deserted,” he said.

After spending nearly the entire four months of the war among Ukrainians, Hughes said the conflict is increasingly wearing on them.

“It’s starting to take its toll — people are not doing so well, so many lives have been destroyed, there’s massive unemployment and nobody’s got any money,” he said, adding the delivery of supplies like fuel to the eastern war zone remains a challenge.

To the south of Kharkiv, in the country’s Donbas region, outgunned Ukrainian forces are plastered by Russian artillery and slowly pushed back.

Those hardships are only deepening Ukrainians’ hatred of their invaders, said Hughes.

“They’re angry people and they want revenge … there’s a lot of bad blood,” he said.

But the Calgarian said he and his group Helping Ukraine — Grassroots Support have been trying to rebuild disrupted lives by building microhomes, something he championed in Calgary.

After launching the effort in bombed-out areas surrounding the capital Kyiv, Hughes said he’d been scouting construction sites around Kharkiv.

Volunteers train locals more accustomed to working with bricks on how to build with wood, he said.

The man known in Calgary for his love of urban farming said he’s not sure when he’s returning to Canada, after acquiring a visa that allows him to stay in Ukraine until late 2023.

On Friday, his team delivered supplies to an orphanage in the city of Zhytomyr, where children waved makeshift Maple Leaf flags.

And Hughes said he set aside some time with other volunteers — that includes some Canadians — to mark Canada Day.