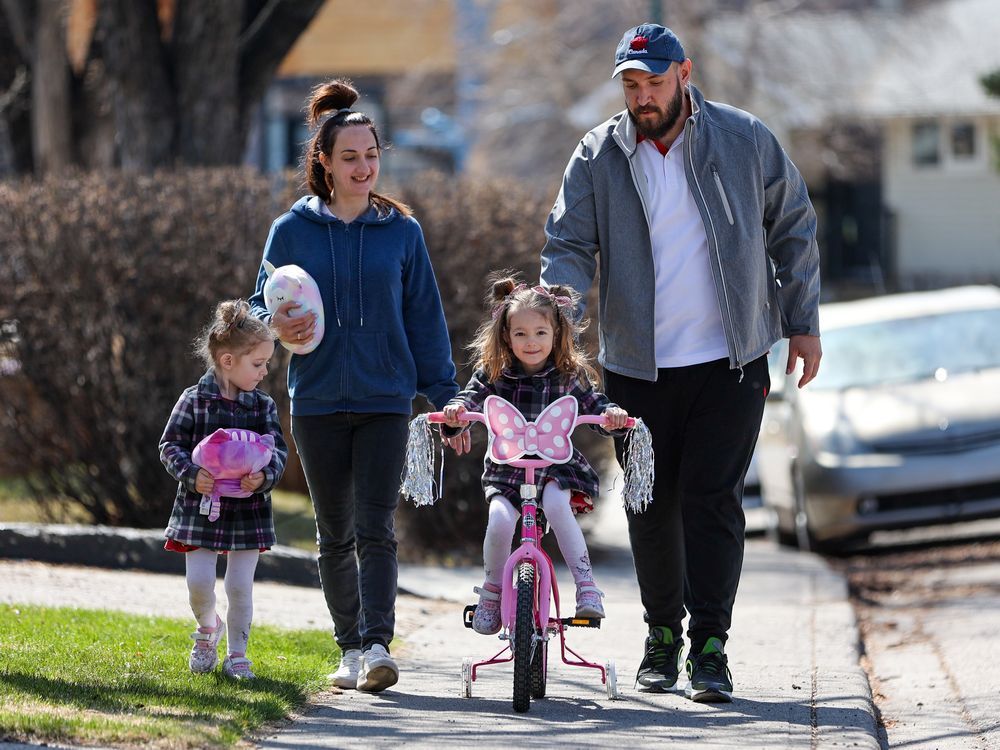 Oleksandr and his wife Yuliia packed up all of their belongings months before Russian forces crossed the border into Ukraine.

The couple and their two young daughters lived in Ukrainian territory in the Luhansk region, closer to the Russian border. The family knew they wanted to leave, but their plans were fast-tracked when they saw how the Russian military was steadily preparing for an attack, Oleksandr said.

“We saw that from the Russian side there were too many war helicopters running, too many troops,” he said. “They were planning to attack.”

Oleksandr began calling his family and friends to warn them about what was happening. This was before Russia began its invasion of Ukraine, and no one was ready to believe it.

“I called them to try to explain, but they didn’t believe it,” he said. “All Ukrainians, I think we hope that it’s finished. It must be finished already, because we are all tired of this war.”

Luhansk has been a point of contention between the two countries for years after Moscow-backed separatists took control of southeastern regions of Luhansk and Donetsk in 2014.

His brother is still in Ukraine, unable to leave and hiding underground. His parents and Yuliia’s parents are still living in the Luhansk region, determined to stay.

It’s become more difficult for the family to stay in touch with their loved ones, Oleksandr explained. Russian troops have destroyed Ukrainian cell towers, forced them to swap out their phone SIM cards to Russian SIM cards, and dismantled ATM machines to only distribute rubles.

“They take out the flags from administrative buildings, Ukrainian symbols. They try to destroy all the nation’s identity because they don’t want to think that Ukraine is separate from Russia.”

Before the Ukrainian border closed, Oleksandr, Yuliia, Yeva, 4, and Danea, 3, packed what they needed into four bags.

Yuliia and the kids went to Kharkiv to catch a flight to Hungary, while Oleksandr took a train from Kharkiv to Kyiv with the family’s cat, Simon, who was not allowed on the plane.

The family eventually reunited in Budapest. They were figuring out their next steps in Budapest when Russia began its invasion.

“It was unbelievable. We saw how they were preparing for it … nobody can believe this can be. It’s terrible.”

The family then travelled to Austria to get their Canadian visas. Once they secured their visas, they began looking for a new place to live in Canada. After some searching, they decided on Calgary.

Oleksandr and his family then began a trip through Europe, where they managed to catch a flight from Paris to Calgary.

Yuliia would use Google Translate to search for organizations that could help them find a new home and employment when the Calgary Immigrant Support Society popped up in the search list.

Calgarians step up to help

Saima Jamal, co-founder of the volunteer-run Calgary Immigrant Support Society, said she got a Facebook message from Yuliia asking for help.

Within the hour, she said Prairie Western College agreed to donated $6,000 to the family. Jamal said they used the money to rent a place in Bridgeland for the family, but the agreement hit a snag when the apartment owner refused to allow their cat.

“That’s when all the plans, everything fell apart. But you know, like they say, God works in mysterious ways,” she said.

Jamal posted the family’s story to the group’s Facebook page, asking if anyone would open their home to the family and their cat. Calgarian Alice Wheaton saw the post and offered their basement suite soon after.

“I’m from Newfoundland, and that’s our culture. If anyone needs anything, you step up,” Alice said. “The sweet spot for me is immigrants and animals.”

The family arrived to Wheaton’s house on April 20 with Simon in tow. Alice and her husband Ernest welcomed them in and started helping the family come up with a plan.

Alice was able to connect Oleksandr with a job through a friend four days after they arrived. Others who knew the Wheatons began dropping off gifts for the family, like giftcards, food and clothing.

One friend brought the family’s two young daughters new bikes. Another neighbour has been writing kind messages in chalk outside the family’s home.

Stepping up and offering someone in need a place to stay is “easier than you think,” Alice said.

“It has not increased my workload, but it’s increased my compassion and patience, and love. And endorphins, I have endorphins to spare these days,” she said.

“Most people might not have a basement with laundry and a kitchen. But they probably have a room for a mom and two children. It doesn’t have to be spectacularly perfect.”

There is a desperate need for more Calgarians to step up like the Wheatons have, Jamal said. The volunteer organization is working with at least four families leaving Ukraine who need a place to stay.

“How often would you like get an opportunity to do this kind of good work?” she said. “These refugees, they’re fleeing war, and they need shelter. For now, you can do nothing to stop this war, but you can give them shelter.”

Anyone interested in supporting families is asked to join and message the Calgary Immigrant Support Society Facebook page for more information.