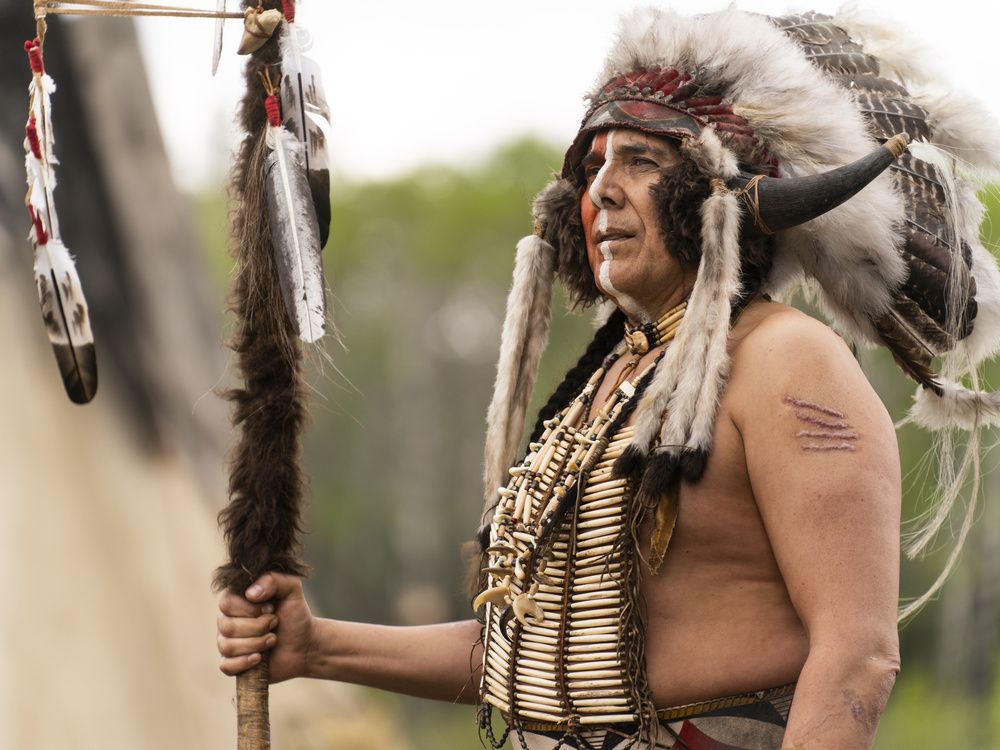 Before filming began on the big-budget action movie Prey in June 2021, actress Michelle Thrush went to the Calgary production office and got a first look at some of her young co-stars.

She was there to get a COVID test. But there was a large group of Indigenous performers on hand, mostly young males, who would become integral to the production of Prey. Led by Amber Midthunder and Dakota Beavers, who play heroine Naru and her brother Taabe in the film, respectively, the largely Indigenous cast would go through intense training before cameras started to roll on the Stoney Nakoda Nation west of Calgary.

“They were in there training on bows,” says Thrush. “All these young Indigenous men with long hair who were in their early 20s, late teens. I loved it so much. They just worked really hard, all of them together. It was pretty amazing seeing that happen.”

Prey, which begins streaming Aug. 5 on Disney +, is the fifth instalment of the Predator series that began back in 1987 with the Arnold Schwarzenegger original. Directed by Dan Trachtenberg, this sequel gives the sci-fi action a unique backdrop by going back 300 years to when the Comanche Nation ruled on the Northern Great Plains. This is the world where the deadly Predator lands his spacecraft to begin his hunt. The story follows Naru, a fierce warrior who is underestimated by the young males in her tribe, as she goes on a quest to find the hulking, mysterious killer hunting humans for sport.

The film calls for a number of young Indigenous men to play Naru’s fellow warriors, a group that is skilled even if they are condescending to our hero. Some were brand new to acting. That includes Beavers, an Arizona musician making his film debut. Some of the actors were local, including Tymon Cartier from Onion Lake Cree Nation and Cody Big Tobacco of Siksika Nation, who also competed in the 2021 Calgary Stampede in the relay race during production.

While all the actors came with various skills, the training was necessary because of the production’s emphasis on authenticity. Juanita Pahdopony, a Comanche educator, was brought in as a consultant. Jhane Myers, a Comanche filmmaker, was a producer on the film. This meant that there was a lot of attention paid to historical details. This may be an underdog sci-fi story of a young warrior with 300-year-old weapons facing off against a high-tech alien killer, but Pahdopony and Myers helped ensure that everything from the language to the food, regalia, weapons, face paint and rituals were historically accurate.

“There is a different level of respect that’s shown when there is Indigenous leadership happening,” Thrush says. “We really felt that.”

With 40 years of film and television roles, a number of acting awards and a history that includes everything from working opposite Johnny Depp and Benicio del Toro in American films to her one-woman theatre show Inner Elder, Thrush has long been an advocate for representation and diversity in entertainment and for authenticity on screen.

She was a natural to be cast in Prey, having starred in some of the province’s biggest productions, including North of 60, Bury My Heart at Wounded Knee and Fargo. She plays Aruka in Prey, Naru’s mother who pushes her daughter to take a more traditional role in the community rather than insist on being a hunter and warrior.

Throughout the decades, the Cree performer has seen the industry slowly change to include more Indigenous storytellers and less cliched portrayals of Indigenous people in films. But she admits she still tears up sometimes when describing the plot line of Prey and its hero. To have an Indigenous actress lead a big-budget Hollywood franchise movie is monumental, she says.

“To have a young Indigenous woman who can kick ass on the big screen is big,” she says.

Calgary actor Julian Black Antelope plays War Chief Kehetu, the leader of the Comanches, in Prey. As an actor, writer, director and producer, he has been a mainstay in the Alberta film industry for nearly two decades. He thinks having a young Indigenous female action hero is “long overdue.” But he was also thrilled to work on a film with Myers, an Indigenous producer, which he says is a rarity.

“She is super down-to-earth and really approachable,” he says. “It was so refreshing. I thought this was even more important on a film set with a young Indigenous cast and even our background performers to see ourselves, one of our own, in that kind of position of authority. It definitely opened up a lot for Indigenous actors. Some of these guys in lead roles, this was one of their first roles ever.”

While the role of Kehetu ended up being rather small – with some of it ending up on the cutting-room floor – Black Antelope’s star has been on the rise as of late. He will play Argent in Netflix’s upcoming take on the Dark Horse comic-book series and just wrapped production on Hulu’s adaptation of Esi Edugyen’s Washington Black, productions that are so big he has been sworn to secrecy about them. He also just wrapped the second season of Aboriginal People’s TV Network’s The Secret History: The Wild West, which he also directs, writes and executive produces.

His Calgary-based production company, Herd of 1 Media, has long had an educational component that trains Indigenous film workers on set. This summer, Black Antelope helped launch a pilot project for Counting Coup Indigenous Film Academy Corp in partnership with Old Sun Community College in the Siksika Nation. The paid program took 25 young Indigenous people through mentorship and certificate training courses and hands-on practicums dealing with all elements of the film and television industry. Among his partners is Edmonton-born actress, producer and activist Jessica Matten, a Red River Metis-Cree who is enjoying success as one of the leads in the hit AMC drama Dark Winds.

Black Antelope says the plan is to make the program national and help give Indigenous storytellers the tools they need to find long-term work in the film industry. Films such as Prey offer hope that Indigenous artists have a significant role to play in telling their own stories.

“It was a great cast to be around,” Black Antelope says. “Leave it to a bunch of Indigenous talent freezing their butts off at 4 in the morning to crack jokes around the fire all night long.”