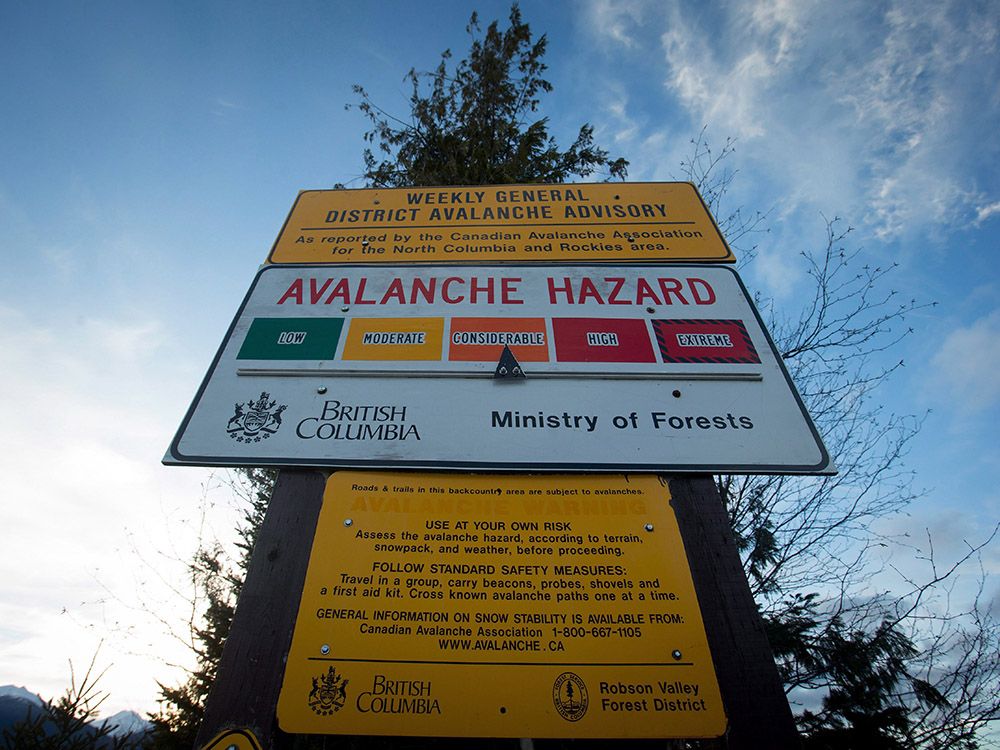 The warning includes Jasper National Park as well as several popular destinations on the B.C. side of the border

Avalanche Canada is warning of extreme avalanche risk in the backcountry across several regions of B.C. and Alberta, as sun and warmer temperatures are forecast throughout the weekend.

The agency issued a special public avalanche warning on Thursday and it will remain in effect through Sunday. The warning includes Jasper National Park as well as several popular destinations on the B.C. side of the border, such as Glacier National Park and the Purcells.

“Our main concern is a critical weak layer buried about 60 centimetres below the snow surface throughout these regions,” explained James Floyer, forecasting program supervisor for Avalanche Canada.

“This layer is deep enough to produce large avalanches, yet shallow enough to be triggered by a human or machine. The forecast of warm temperatures and sun will contribute to this problem this weekend.”

Temperatures this weekend across southern and central Alberta are expected to remain above zero, according to Environment Canada. Forecasts show a cold front set to move over the region Thursday evening with showers and flurries possible — but that should clear by Friday morning, making way for sunny skies this weekend.

“Typically in the springtime, when we start to see these warmer temperatures like we’ve had over the last couple days in much of Alberta … it can actually make the snow unstable,” said Environment Canada meteorologist Alysa Pederson.

“Warming up of the snowpack can make it destabilize with a little bit less of an impact, so a human could trigger (an avalanche) instead of needing a big cornice or something like that.”

Floyer said those warm temperatures and sun will add to the dangerous conditions. Backcountry users are advised to stick to simple terrain and avoid grouping up in places threatened by avalanches.

“Under the current conditions, sparsely treed slopes do not provide protection from avalanches and could be even more dangerous due to the risk of being swept into trees,” said Floyer.

“Lower angled slopes or densely forested areas, where the tree canopies are touching, will be better choices as long as they are not threatened by steep slopes from above.”

Avalanche Canada urges those headed out to the backcountry to check their regional avalanche forecasts at www.avalanche.ca.

“Everyone in a backcountry party needs the essential rescue gear — transceiver, probe, and shovel — and the knowledge to use it.”