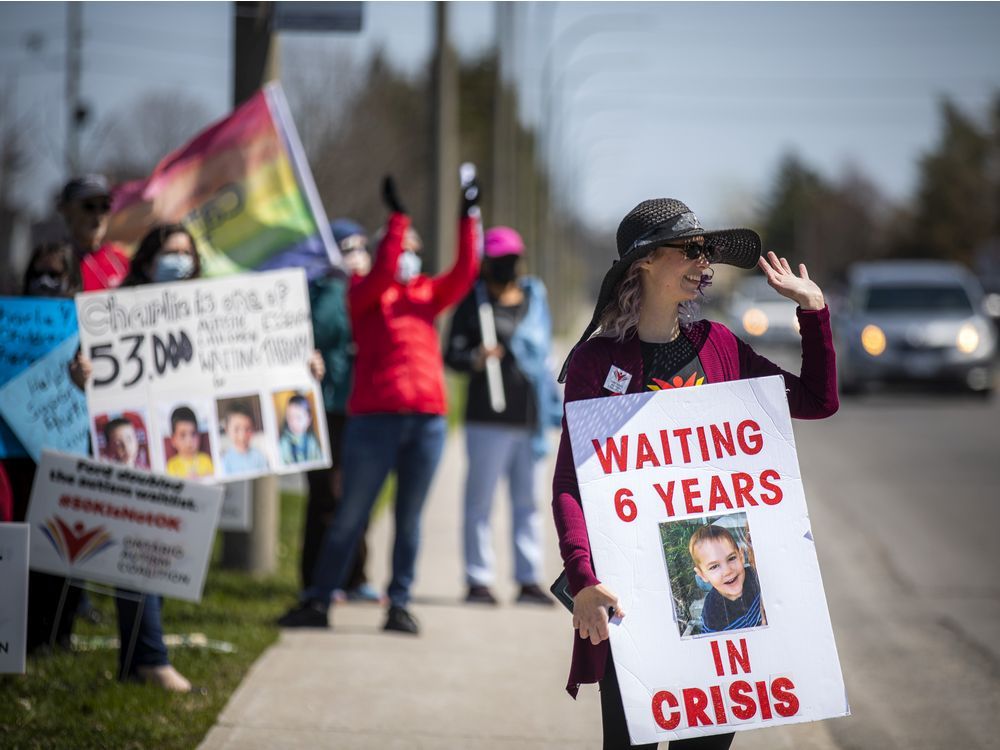 In April 2018, Cathy Varrette thought the long wait for autism services for her then four-year-old son was nearly over.

“I remember our CHEO worker said we were really close to the top of the waitlist and we should be thinking about what sort of services we wanted,” said Varrette, as she stood Saturday with other autism families protesting outside Ottawa West-Nepean Conservative candidate’s Jeremy Roberts’ campaign launch.

“That was four years ago,” Varrette said. “We’re still waiting. We’ve been waiting since he was two.”

Pre-pandemic, the autism file was one of the hottest of hot potatoes for Doug Ford and the Conservatives. The government has made some progress on the file, but it’s moved far too slowly, the parents say. Fewer than 650 children have been accepted into the new Ontario Autism Program. Another 53,000, including Varrette, remain on the waitlist for services.

“I do worry that we’ve missed a lot of developmental milestones that could have been met if we’d gotten proper funding and proper support,” she said. “I’d like them (the Conservatives) to deliver what they promised. I don’t feel I can trust them. We’ve been waiting for four years and they’re saying ‘Elect us and we promise this time we’ll do it.”

The weekend protests have been a weekly event for the families as the Ontario election approaches. Last week they picketed Nepean incumbent Lisa MacLeod, who was in charge of the autism program in the first years of the Ford government. Two weeks ago they protested at the Kanata-Carleton office of Merrilee Fullerton, who was minister of Children, Community and Social Services when the election was called.

Autism therapy such as Applied Behaviour Analysis, can be enormously expensive. Kerry Monaghan’s son, Jack, receives 15 hours of ABA therapy a week at a cost $80,000 a year. It was funded under the previous Liberal goverment.

Monaghan said the Conservative model hands parents cheques, but provides little guidance on how to use the money, a particular problem for those who have trouble navigating the complex services available.

“It’s so backwards,” she said. “It’s downloading the onus on families to decide what they need. You don’t go to your family doctor and say ‘My head hurts’ and they say ‘Here’s $30,000. Go find someone who can help you.’ That’s not how it’s supposed to work.”

The Conservative plan has age caps that will leave some children “aging out” of support and relies on algorithms and questionnaires to determine what services will be provided, she said.

As the demonstrators marched and waved signs, Roberts was inside launching his re-election campaign in a room packed with dozens of supporters, including Conservative stalwarts John Yakabuski (Renfrew-Nipissing-Pembroke) and Steve Clark (Leeds-Grenville-Thousand Islands and Rideau Lakes).

“This is the reason I ran for elected office, to make sure we were doing a better job supporting kids with special needs,” said Roberts, whose younger brother has autism. “I would say we’re in a much better spot today than we were four years ago.”

The Conservatives, he said, have doubled the budget for autism services to $600 million and made interim funding available for families on the wait list while the new program was rolled out. Another $97 million is being spent on children with special needs and other medical conditions, he said, along with funding for a new “one door for care” building at CHEO to house all its autism services.

“That’s a huge step forward for Ottawa,” he said.

The Ontario election is June 2.