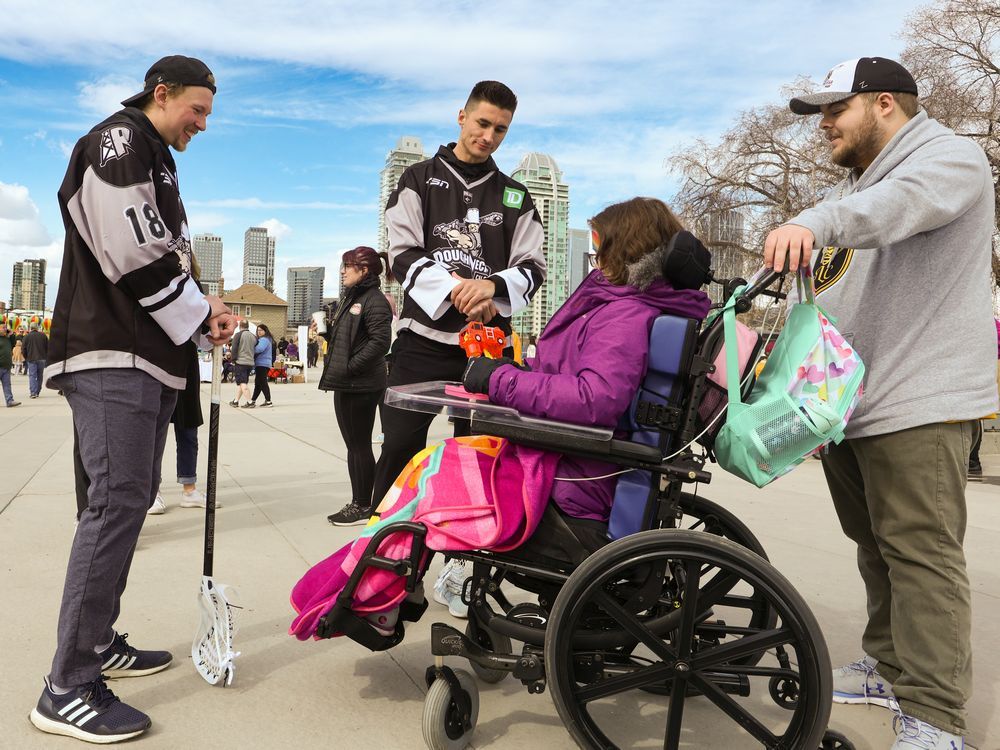 An annual celebration for Calgarians living with autism chose to move to a different location due to the ongoing freedom protests in the area.

The Autism Asperger’s Friendship Society (AAFS) and Autism Calgary team up to organize a festival for Calgary’s autism community every year on April 2 in recognition of World Autism Awareness Day.

The festival has been held at Olympic Plaza for the last nine years, until organizers realized the freedom protests nearby would negatively impact attendees with sensory disabilities, explained event coordinator Tracy Mendoza.

“If there was any honking of horns, people protesting or loud sounds that weren’t in the accepted sensory realm, we were afraid that the kids might have a reaction,” Mendoza said.

Autism, or autism spectrum disorder (ASD), is a lifelong neurological condition that affects verbal and non-verbal communication and social interaction. Someone with autism may process sensory information differently, so loud noises or unexpected situations can feel overwhelming and frightening.

Suddenly, four months of planning had to be crunched down into one week, Mendoza said. Organizers had received their event from the city for Olympic Plaza a week or two before, meaning all their effort, time and payments put into the location went by the wayside.

“It threw a wrench in our plans. I mean, our heart is usually at Olympic Plaza, but there’s nothing we can do,” she said.

“I’m an autism mom, and I’ve been doing this for 21 years. So whatever is dealt to us, we deal with that. That’s not new to our community. Like all parents, caregivers, and educators that have kids with autism, we just have to deal with whatever happens.”

AAFS was able to find a new location at the Calgary Stampede Youth Campus, which was secured through financial support from event sponsors. Posters with the new location had to be printed, existing floor plans changed, families notified and every vendor called.

“We did a lot of planning, but we squeezed a lot in a week.”

Lyndon Parakin, executive director for Autism Calgary, said World Autism Awareness Day is about giving people who identify as autistic or on the spectrum an opportunity to celebrate what makes them unique and different.

Although the protests moved them out of Olympic Plaza, Parakin said the annual event may have found its new home at the Youth Campus location.

“We came here to the Calgary Stampede campus and we still have that same culture, that same feeling. Maybe this is the best venue for that. Nothing was lost, and maybe it pulled us stronger together.”

Police arrested one person on outstanding warrants and eight traffic summons were issued, according to a press release.

Police say all of the injunction rules were followed. The demonstration ended around 4 p.m.

Ward 11 Coun. Kourtney Penner said it was difficult to hear that the event chose to change location because of the protests downtown.

“People are having to rethink how they engage in our downtown and in our public spaces, and to me that’s disappointing,” Penner said.

Penner said she will ask city administration to review future events that are booked at Olympic Plaza to begin conversations with organizers about how to navigate the situation.

“We need to make sure that we understand who takes priority. What measures can be put in place for the safety of all participants?” she said.

“There’s lots of questions still about how the protests are impacting Calgarians and their right to enjoy our cities together and assemble. It’s definitely a nuanced and complex situation still.”

Ward 7 Coun. Terry Wong said he agreed with Penner that city administration should be proactive in reaching out to organizers affected by the protests downtown.

“I do expect as a councillor that the city do a better job to coordinate various different activities, festivals, and events. This is no different when people are applying for permits,” Wong said. “The city could have coordinated this a little bit better.”