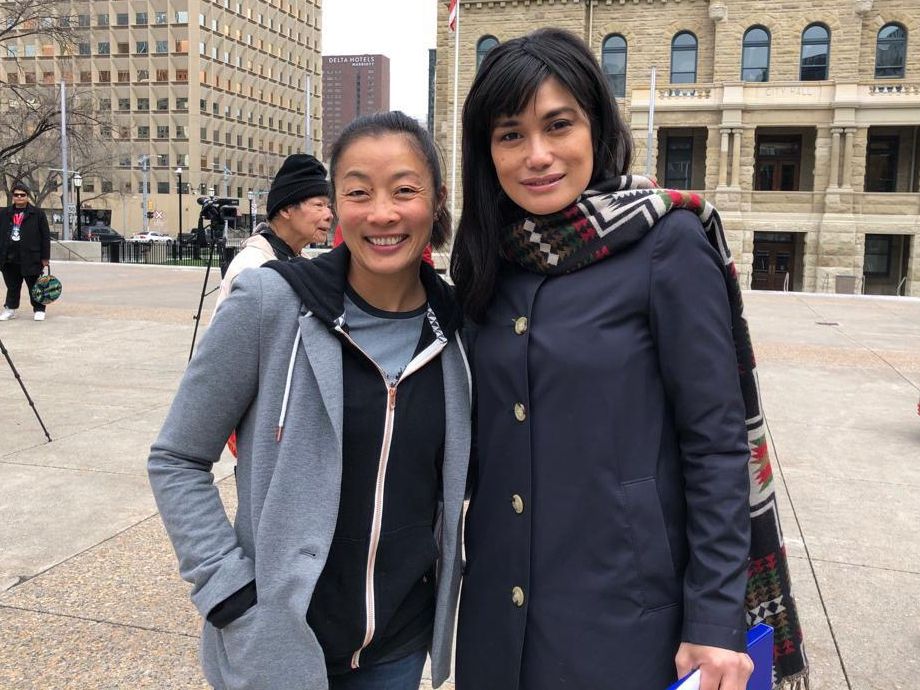 Dozens of people listened to several speakers at City Hall on Tuesday to celebrate Asian heritage and culture, while recognizing the need for all communities to push for representation and equity.

On her way to the event at City Hall, actor Linda Kee said she started to cry thinking of her Filipino parents. Kee helped organize the event with several speakers.

“I’m standing on the shoulders of people like my parents, and I get to come here and share my voice and take a stand,” Kee said.

Her mother spent 40 years working as a nurse in Canada, her father was an engineer. Kee was born in Canada. Still, she said her family was repeatedly told they did not belong.

“It’s always about not belonging. This is not your home, it’s ours. Go back,” she said.

“Existing in a colonized country, you subconsciously try to erase your heritage. Our heritage is a big part of what makes us who we are, and when we feel like we’re not connected to who we are, then we don’t know where we belong.”

Kevin Chow, founder of Rawry and Pohly, is celebrating Asian heritage and culture through art projects, including a mural of the Qingming Scroll and a cookbook initiative.

He said he wants to use art as a fun way of getting people interested in Asian culture.

“What gets you interested in something new and wanting to learn more about something? Images that bring up nostalgia, fun, creativity, empathy,” he said.

“Being able to represent such a traditionally represented art piece, like the Qingming Scroll, in a fun, cartoonish way, it really seems more accessible to everyone of any culture and any age demographic.”

In honour of Asian Heritage Month, AHF is launching a #ProudAsian social media campaign, which invites stories from youth to share their stories. Yan Zhu, 20, shared part of her story at the event.

Zhu’s family immigrated to Canada from China when she was eight years old. As a native Mandarin speaker, Zhu said she eventually lost her language living in Canada.

“Slowly I started to forget. I started to lose a sense of who I was. That only bothered me until a few years ago when I realized I couldn’t communicate with my grandparents,” Zhu said. She is now trying to relearn Mandarin to reconnect with her heritage.

It’s that forced perception of ‘otherness’ that contributes to anti-Asian racism and violence, explained Dr. Guofang Li, professor and deputy head in the department of language at the University of British Columbia.

“Those are the kind of perceptions that contribute to anti-Asian racism. But since the pandemic, it has really become more explicit.”

A new national report released by the Chinese Canadian National Council Toronto Chapter and Project 1907 found a 47-per-cent increase in reports of anti-Asian racism and xenophobia in Canada in 2021. Nearly 75 per cent of submitted incidents were committed by white men.

She said it is essential for school curriculums to address knowledge gaps in Asian American and Canadian history to stop targeted hate and violence. Cultural reciprocity, or learning and respecting someone else’s culture and heritage, also plays a key role.