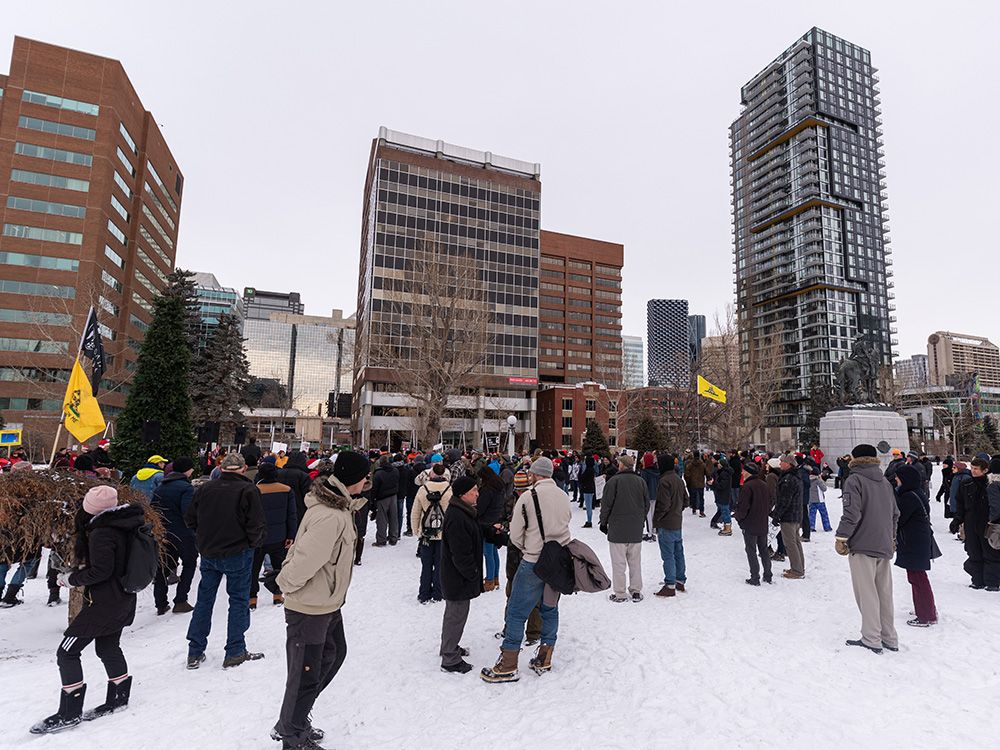 The union for health-care workers at a clinic in Calgary’s Beltline says they are being regularly harassed by anti-COVID-19 restrictions protesters energized by convoys allied with them.

Demonstrators who have been gathering for months around Central Memorial Park have been taunting and bullying staff entering and exiting at the nearby Sheldon M. Chumir Health Centre and delaying ambulances, say Alberta Union of Provincial Employee officials.

“Front-line health-care workers, patients and people living near the Sheldon Chumir in downtown Calgary have been subjected to protests for weeks, but things got worse after the truck convoy hit the news, leading to bad and sometimes dangerous behaviour at the centre,” Bobby-Joe Borodey, AUPE vice-president, said Friday.

“Our members say they are scared when walking into the centre to start work, when walking to their cars parked outside after their shifts, or to catch buses and transit home.”

Some of the activists demanding an end to vaccine requirements and other pandemic safety measures have also been banging on the clinic’s windows and blocking roads around the facility.

Some of the staff have been denounced as “Nazis” by the demonstrators, said Borodey, who added none of their members have yet been physically assaulted in the confrontations.

He said one staffer had to sit in her car for an hour following her shift due to traffic congestion.

A photo from a social media site shows a crowd milling around what AUPE says are anti-restrictions demonstrators blocking an ambulance exit in the past week.

The union says security has been stepped up in recent days in response to the harassment.

The group, Friends of Medicare, warned of plans to escalate protests at hospitals around the province, adding workers at some facilities are being advised to enter and leave them covertly.

“Workers at other hospitals and facilities have been told to avoid wearing their scrubs when coming and going from work,” said the group’s executive director, Chris Gallaway.

“What is happening here amounts to the harassment of workers who are just trying to do their job.”

Several people claiming to be protestors told Postmedia said they’re not to blame for any confrontations at the Sheldon Chumir Centre, that their gatherings have never strayed to the facility.

Those protests, whose organizers claim are now drawing 10,000 people on weekends – come at a time when COVID-19 hospitalizations in Alberta are at a pandemic high, with deaths from the disease mounting rapidly, with another 26 announced Friday.

Last year, hospitals across the country, including Foothills Medical Centre, were the sites of protests by those opposed to health-care workers being ordered to be vaccinated against COVID-19 or face regular tests.

In some cases, health-care workers say they were showered with vitriol while ambulance service was disrupted.

That led the UCP government to enact legislation toughening penalties against people who obstruct health-care workers and facilities, with fines for repeated offences of up to $25,000, six months in jail or both.

But AUPE officials are convinced large convoys made up partly of truckers that have blocked streets in downtown Ottawa and the U.S.-Canada border crossing at Coutts and the perceived lack of police action against them has fed the aggressiveness of the Calgary demonstrators.

Residents in Ottawa and Coutts say they’ve been harassed and intimidated by protesters.

“Albertans have been calling health-care workers heroes for two years, but these protesters think it’s OK to bully and harass them,” said Borodey.

“They will not let ignorant bullies stop them from doing their jobs.”

The union is worried about the possible spillover from a planned anti-restrictions demonstration at Central Memorial Park on Saturday, which is promoted in a poster as a “peaceful rally … in support of our trucker convoys in Ottawa and Coutts.”

The UCP government’s appeasement of the protest groups has only encouraged dangerous activity outside hospitals, said Mike Parker, president of the Health Sciences Association of Alberta, which represents paramedics.

“Premier (Jason Kenney) needs to stop caving to fringe groups and protect the health-care workers that are protecting all of us,” Parker said in a statement Friday.

“The fact that people would protest outside of a hospital and block ambulances and our health professionals from providing life-saving care is disgusting and downright dangerous.”

Alberta Health Services is aware of safety concerns among its staff at Sheldon Chumir stemming from nearby protests, said spokesman Kerry Williamson.

“AHS Protective Services is engaged with the Calgary Police Service to ensure the ongoing safety of staff. AHS has been keeping union partners updated,” he said in a statement.

“We strongly urge Albertans to be kind, courteous and respectful of our hard-working health-care professionals, who continue to provide care and support in challenging circumstances.”

In a tweet Friday, Courtney Walcott, city councillor for Ward 8, didn’t mention activity around the Sheldon Chumir Centre but cited concerns over the protests’ impacts on the area.

“What concerns me most about the protests in the inner city and elsewhere is the blatant disregard for others,” he said.

“People from around Calgary have deadlocked downtown neighbourhoods, impacting businesses, denying access to health care — in the name of freedom.”

There have been no reports of any charges laid by police at the Beltline health centre.

In an email, a city police spokesperson said CPS is aware of the demonstration planned for Saturday and that “our primary function is to ensure public and officer safety. We will monitor and respond accordingly.”

A request for comment from a protest organizer Friday went unanswered.