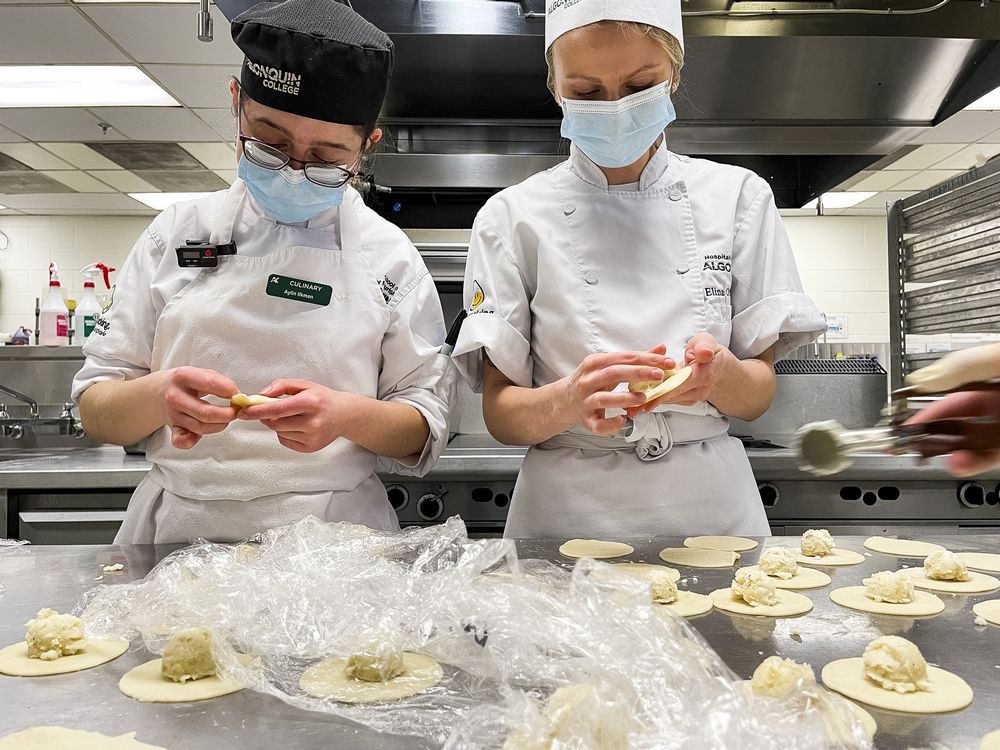 When Elina Olefirenko was a little girl growing up in Ukraine, she watched her grandmother make perogies.

More than two decades later, on Tuesday morning, Olefirenko, shared her perogy-making expertise at Algonquin College. Now a pastry chef and instructor at the college, Olefirenko, 30, counselled an assembly line of students and faculty in Algonquin’s school of hospitality and tourism that made about 2,600 of those delicious potato-filled dumplings for a good and appropriate cause: helping the besieged people in Olefirenko’s war-torn homeland.

Just before Easter, the school will distribute to buyers 150 samplers of food inspired by Ukraine — not only frozen perogies, but also canapes based on chicken Kyiv, garlic bread rolls called pampushky and Easter sugar cookies of the Ukrainian flag. Priced at $50 each, the samplers sold out in two days last week, when the school made them available.

For Olefirenko, pitching in on the project helped mitigate her distress about the war, if only momentarily. “We’re doing something,” she said.

Olefirenko was able to bring her mother to Ottawa a month ago as a refugee. But she remains extremely worried about her father, who is in the southeastern Ukrainian city of Zaporizhzhia.

“It’s close to the war, unfortunately,” Olefirenko said. Her father, who has a food supply business, is helping some people to get food and others to leave the country, Olefirenko added.

Watching the suffering in Ukraine on the news is “devastating,” Olefirenko said. While she has no siblings, she said: “The whole of Ukraine is your family at this point.”

It was Tanya Skeates, a chef and instructor in the hospitality and tourism school, who thought of and organized the fundraiser, which will send funds to World Central Kitchen, an organization that provides meals to countries in crisis.

“I was not ready to go volunteer in a war zone,” she added.

But Skeates was able to mobilize roughly 30 students and 15 faculty-member volunteers to cook everything needed for the baskets over several days.

For students who spent much of the past year learning virtually, it was great for them to “see some action” and be involved in a large production, Skeates said.

“Let’s do some good here. Everybody’s having fun,” she said.

She was also glad to teach the students a lesson about social responsibility, she added.

Olefirenko was not the only Ukrainian among Skeates’s volunteers. Also busy making perogies on Tuesday was chef and Algonquin instructor Patrick Kostiw, who is Ukrainian on his father’s side.

The Calgary-born, Montreal-raised chef said making perogies made him nostalgic. “My brother and I would argue about who would get more of these at the dinner table,” he said. “It brings back good memories for me of my family.”

At another station, Olefirenko, who plans to open her own store, Elina Patisseries, in a few weeks on Sussex Drive, was teaching students Aylin Ilkmen and Denis Tsoy the finer points of artfully crimping the edges of perogies after sealing them.

Ilkmen said she enjoyed increasing her knowledge not just about cooking, but also about Ukrainian culture and language. During the session, music from the Ukrainian rock band Okean Elzy played from a computer’s speakers.

“We’re learning about the people themselves,” Ilkmen said. “Why are these foods the way they are? It showcases the collective community.

“Food brings people together,” she said.