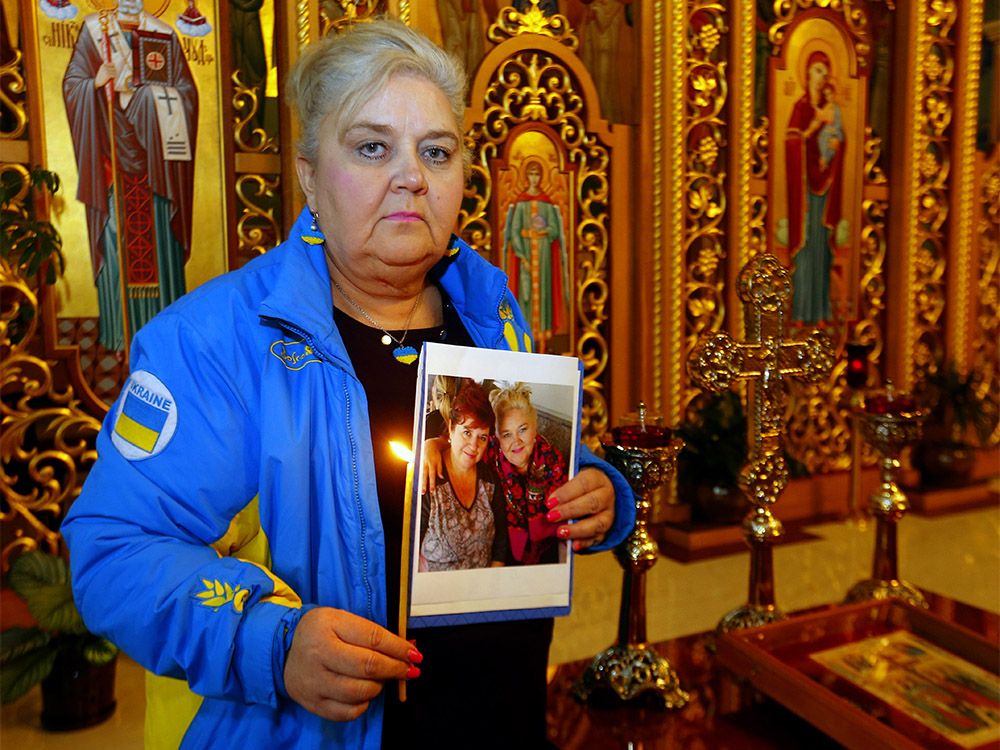 Christine Moussienko refrained from phoning her sister-in-law, afraid the call might give her away to Russian soldiers.

“I didn’t want there to be sound,” the Calgarian said of the delicate hours her relative made her escape from the heavily bombed northern Ukrainian city of Chernihiv.

Svetlana Moussienko, 57, had spent four weeks sheltering in a basement as a heavy Russian bombardment destroyed parts of the city 120 kilometres northeast of the capital Kyiv.

But on March 20, Svetlana and a group of other residents boarded a bus operated by an evangelical church to escape battered Chirnihiv under the cover of darkness and along back roads to avoid Russian troops who’d invaded from Belarus.

“She didn’t know where they were during the drive . . . they were in fear the whole time.”

The refugees eventually found shelter provided by the church near Kyiv and, once in safety, Christine said her widowed sister-in-law’s emotions from the previous four weeks under Russian fire poured out during a call.

“When she was trapped in Chernihiv, Svetlana always put up this very strong front, but when she got out from there she was very upset and crying,” she said.

“There were people there who hadn’t eaten for days, they had no power, no electricity or running water, they were freezing . . . she wishes she could have gotten out sooner but it wasn’t possible.”

In one terrifying incident, Ukrainian officials say a Russian shelling attack and a separate airstrike in March killed at least 57 Chernihiv residents queued up for bread.

Svetlana then joined an exodus made by millions of others to the Polish border, then to Warsaw, where she found lodging with family friends, said Christine.

Her plan is now to come to Calgary and stay with her family, she added.

That the Ukrainian military is now pushing back her hometown’s Russian tormentors isn’t likely to change her mind, said Christine.

“Look what the Russians did to the retreating Kyiv region,” she said, citing alleged atrocities committed by Russian soldiers.

“She left the key of her home with neighbours not knowing if she’d ever be back again.”

Much of the city of 285,000 she’d called home has been obliterated, said Christine, who recalled visits she’d make regularly to see her sister-in-law in happier times.

“It’s like my second home, we’d go every two years to Chernihiv and we’d meet at the Hotel Ukraine,” she said.

It was hoped Svetlana would come to Canada sometime this month, but the time of her arrival is unknown for now, said her sister-in-law.

Ottawa is streamlining the immigration process to allow Ukrainian refugees to stay in Canada for up to three years as temporary residents, and is looking at providing economic support for those who open their homes to them.

As of March 30, the federal government had received more than 91,000 temporary resident visa applications and had approved 14,500 of them.

Svetlana has already undergone some refugee processing to come to Canada while in Poland, said Christine.

“I’m just thinking what it’s going to be like for her to have all of this beauty and calmness (in Canada).”