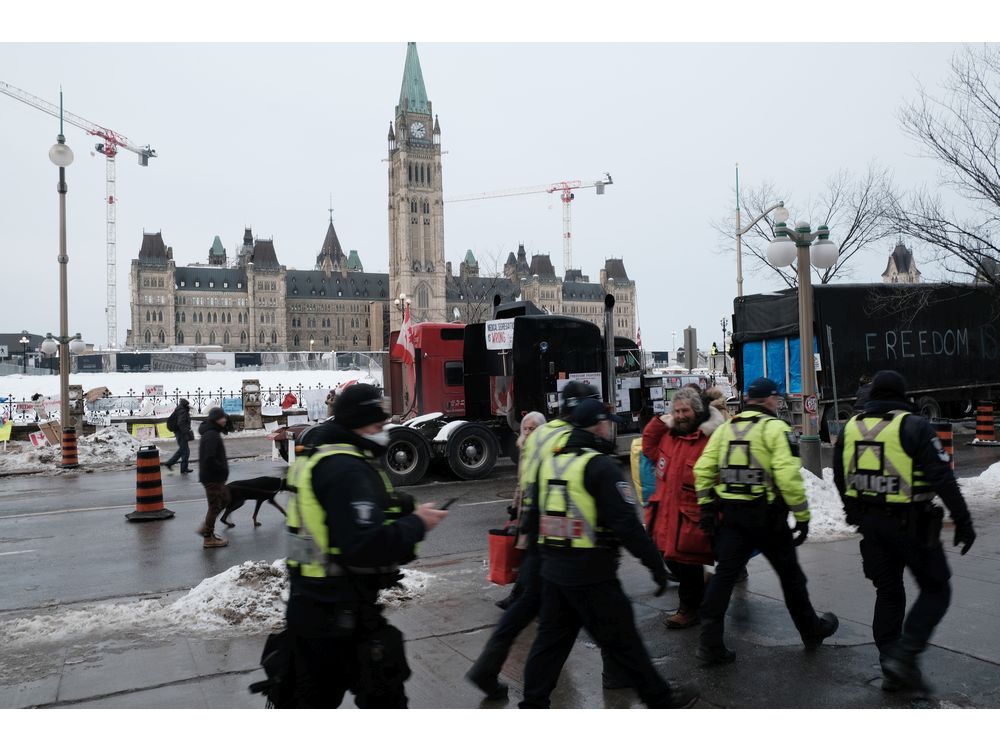 After appearing to surrender to the protesters who have laid siege to the capital for the past two weeks, I guess Ottawa residents should be grateful that the police are slowly beginning to crack down. Other groups may be watching what’s happening, and for the sake of the city and its residents now and the future, the police had better get their act together.

For the best part of the last two weeks, the mayor and the police chief have not stopped telling us how an overmatched city could do little to stop the chaos unfolding in our streets and neighbourhoods. Too dangerous to take action. Police Chief Peter Sloly said the demonstration might not have a policing solution and Mayor Jim Watson added, “Clearly we are outnumbered and we are losing this battle … The situation at this point is completely out of control as the individuals with the protest are calling the shots.”

Then, somehow, the police appeared to grow some backbone and are now pushing back. The shack that was set up near Confederation Park under the gaze of the police is now dismantled. Ticketing for parking infractions has been stepped up and arrests for criminal acts have increased. Perhaps more significantly, police raided the Coventry Road baseball parking lot that has been used as a staging point for the protesters, and seized thousands of litres of fuel. And Watson declared a state of emergency, even though what the declaration will actually achieve remains unclear. The city also asked higher levels of government for 1,800 additional police and support staff to add more muscle to the law enforcement effort.

Yes, policing is hard even at the best of times, and harder still, when faced with protesters who have turned into occupiers. But let’s be clear about one thing: Ottawa is under siege because police inaction enabled it. Police are now having a hard time ending the demonstration because they let it fester in the first place. They have a lot of questions to answer, not only for how they handled this protest but, critically, going forward.

Sloly says this protest is unprecedented and there’s no blueprint for how to handle it. That’s debatable because we know from experience that when faced with large, and potentially unruly crowds, say at G20 meetings, police usually establish a perimeter beyond which no protesters are allowed. They can demonstrate, but within a specific area.

So, why did Ottawa police allow this trucker convoy into the heart of Ottawa in the first place? Why did they not establish a cordon around Parliament Hill, and confine the trucks to areas outside the core? Canadians certainly have a right to protest, but nothing says they have a right to do so in 18-wheelers and other trucks, block traffic for days and make life intolerable for local residents.

It may be the police were comfortable with the protesters coming to town, and they misread the protesters’ intent based on poor intelligence. Given the controversial background of some of the organizers, there were strong indications on social media that this was going to be something more than a peaceful protest, but the police didn’t catch on. Some have suggested that if the truckers had been Black or Indigenous rights activists, the police posture would have been markedly stronger. It’s hard to disagree. We saw how the anti-police protests in Ottawa and the 2020 rail blockades around the country were dealt with. The prevailing sentiment then was that those protesters were law-breakers who were harming the economy and they had to be arrested and charged. Many were. Now, under not-dissimilar circumstances, the narrative is that the truckers are freedom fighters and the city has laid out the welcoming mat. We are now reaping the whirlwind.

This is the capital after all, and even if the truckers pack up and go home tomorrow, this won’t be the last we see of them. They’ve been emboldened by the city’s weak response, and other groups will have taken note as well. Ottawa, be warned.

Mohammed Adam is an Ottawa journalist and commentator. Reach him at nylamiles48@gmail.com.