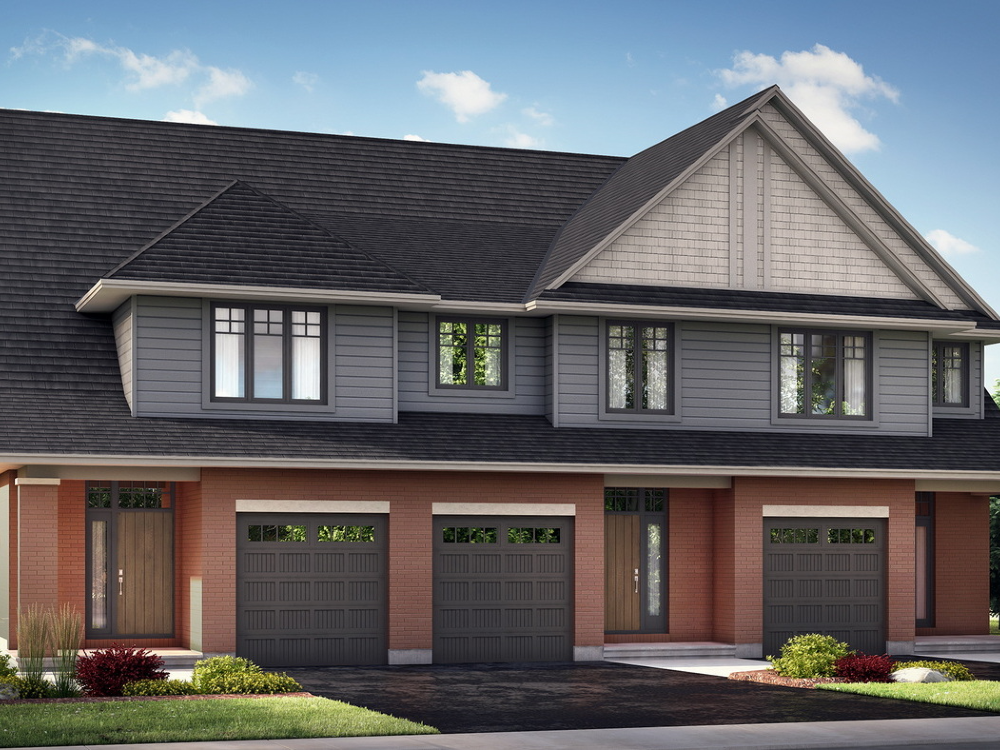 Convenient, connected and tucked away.

That’s how Uniform Urban Developments describes its latest infill enclave in Bel Air Park. The 27-townhome project is called Kinver Private and it is indeed tucked away in a quiet, mature neighbourhood of mostly bungalows and leafy streets that has yet to see the kind of urban redevelopment that has hit Westboro or Hintonburg.

“It’s a great established community that maybe a lot of people don’t know about, but its proximity and convenience in terms of location — it truly is a really central location,” says Emily Meyers, Uniform’s marketing manager.

The project is located between Woodroffe and Maitland avenues just south of the Queensway on the property of the decommissioned St. Michael & All Angels Anglican Church. It’s framed on two sides by the expansive Experimental Farm Pathway and across the street is the French public school Charlotte-Lemieux.

“We just looked at it as a gem of a location in terms of convenience and connectivity. There’s a really lovely NCC green space that runs right through the community,” says Meyers, who lived in the area for several years. “We would go for bike rides at night. It’s beautiful. There’s birds, there’s trees, it’s not just a bike path. It’s a huge swath that cuts right through the community and it creates such a sense of openness and nature… You can bike to Britannia Beach in 15 minutes.”

The project speaks to Uniform’s roots and identity as an infill enclave builder, although the company has branched out into larger projects, such as Richardson Ridge in Kanata.

“There’s a real concerted effort in the company to always hold onto that (identity), she says. “So, whenever these little gem properties come up, (we’re) always looking; we never want to abandon the fact that it’s what established us in Ottawa.”

Like Meyers, the neighbourhood has a personal connection to company owner John MacDougall, who grew up nearby and recalls “the daily walk to school along Iris (Street) into Bel Air Park on my way to J. H. Putman” Public School.

The now-closed school is just across from Kinver Private and the church site was “an easy location to pursue a land acquisition,” says Meyers.

The church was taken down about a year ago and Uniform launched the project April 30. It will feature popular two-storey townhomes from Uniform’s existing portfolio, designed by Hobin Architecture and tweaked slightly to update exterior colours.

Hobin founder Barry Hobin “made a concerted effort to have a lower roofline that ties in all of the units within the block… so the block has a feeling of connectivity,” says Meyers. In fact, the facades give the appearance of large semi-detached homes rather than townhomes.

There was also a desire to opt for a housing type and style that would “not go too far outside of the context of the existing neighbourhood,” she says.

Bel Air Community Association co-president Jean Mullan says there were some concerns about how high the buildings were going to be, increased traffic — especially in front of the school — and whether the new homes would intrude on the privacy of backyards that abut the property.

However, she thinks Uniform “did a really good job of trying to address the concerns” and communicating with residents.

“There’s probably a little more homes in the area than was expected (but) overall, I don’t think it’s going to make a huge impact on the traffic,” she says.

“Change is always hard. Our community has not had a lot of change, really,” she adds. “Once it’s done, I think it’s going to be a nice new community within our community.”

There are four floor plans to choose from — three end unit layouts and one interior — all offering open-concept main floors.

“It’s a well-designed two-storey townhome that’s in the 2,200-square-foot range, three bedrooms, 2.5 baths, that just checks so many boxes,” says Meyers. At the time of writing, pricing starts at $929,000.

While Meyers sees the homes appealing to young families, she notes that these floor plans have been popular among all demographics, from first-time buyers to downsizers.

“I think there’s a desire for people to find a location anywhere in the city that has more opportunity for outdoor space, for less time being consumed commuting.”

Among the features included with the homes are fireplaces, a second-floor laundry, a finished basement space, hardwood stairs, stone counters and air conditioning.

“Someone could finish the home with all the standards and have a really well-appointed home,” says Meyers.

Along with the NNC pathway, the project will benefit from proximity to the Queensway and the LRT. The current Iris Transitway station just a few blocks away will be converted to light rail, which is expected in 2025. Kinver Private is also close to established schools and parks, as well as employment hubs such as the Queensway-Carleton Hospital and Algonquin College, and shopping at College Square.

“In a world where people are looking for more opportunity to get out, get active, bike instead of drive… (Kinver Private) balances all of the lovely things that being downtown offers in terms of biking, walking, being close to shopping, but still has kind of a bedroom community feel to it,” says Meyers. “It’s a lovely established neighbourhood in a wildly convenient location and the people who know about it really love it.”

Construction is expected to start in late fall (Uniform will be servicing the site until then) with first closings likely in late summer or early fall 2023.

What: An enclave of 27 townhomes in Bel Air Park