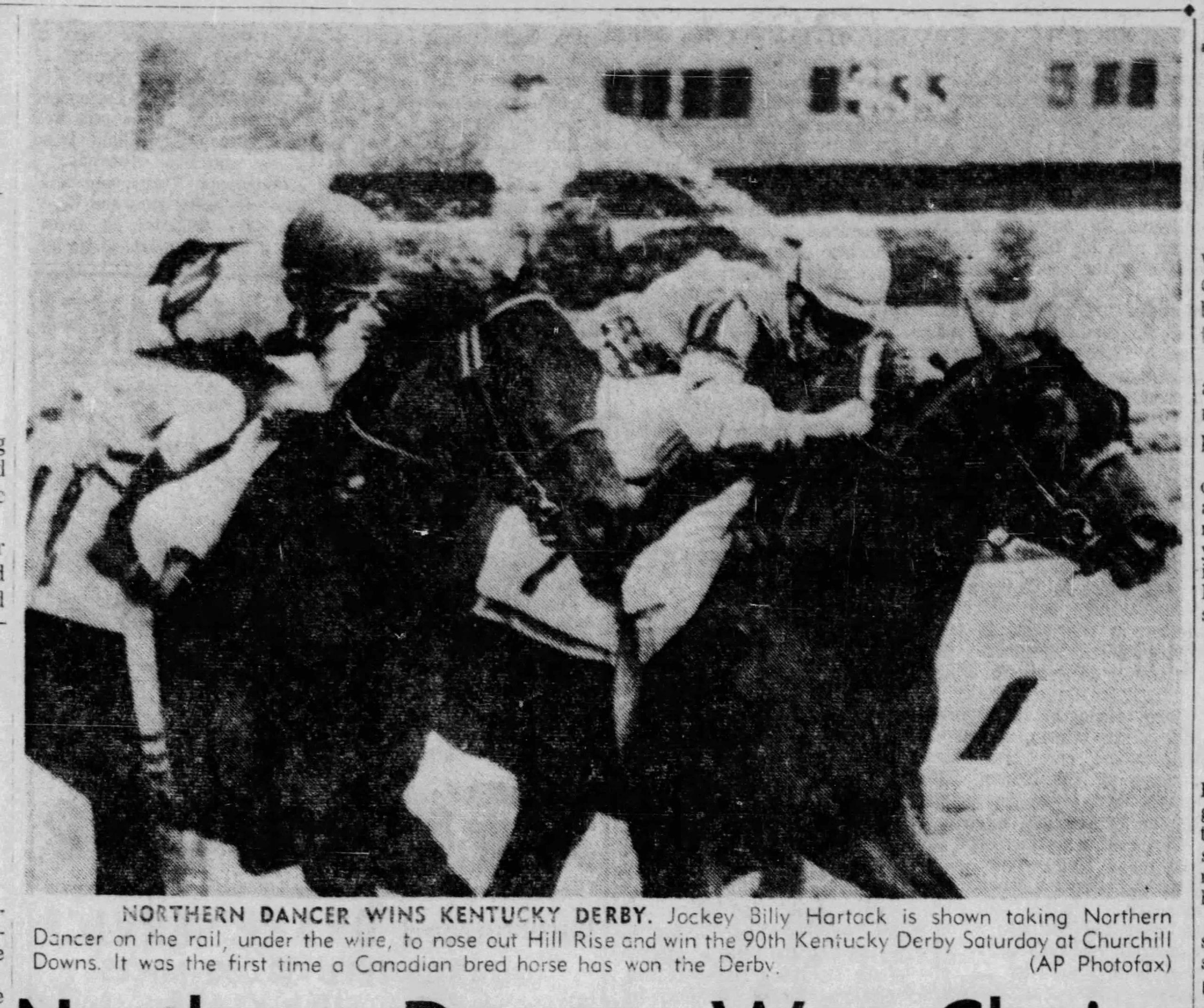 In 1497, Italian-born John Cabot set sail from Bristol, England, to follow Columbus’ route to what he thought was Asia. The expedition reached land on June 24, probably at Cape Breton, and cruised along the south coast of Newfoundland. Cabot returned the following year to explore from Greenland to the Delaware River.

In 1519, Italian artist Leonardo da Vinci died in Cloux, France, at age 67. He painted some memorable religious scenes, most specifically The Last Supper.

In 1670, the charter of the Hudson’s Bay Company was signed by King Charles II. The company, financed by a group of English merchants, received trading rights over all lands draining into Hudson Bay.

In 1740, Elias Boudinot, a lawyer and U.S. patriot, who helped to found the American Bible Society, was born.

In 1840, Theodor Herzl, who founded the Zionist movement, was born.

In 1844, Elijah McCoy was born in Colchester, Ont. He invented 57 devices and machine parts including an ironing board, lawn sprinkler and engine lubricator. Machinists and engineers who wanted genuine McCoy lubricators may have originated the term, the real McCoy.

In 1881, the first sod was turned for the Canadian Pacific Railway as a company line.

In 1908, the original version of Take Me Out to the Ball Game,”with music by Albert Von Tilzer and lyrics by Jack Norworth, was copyrighted by Von Tilzer’s York Music Company.

In 1939, the National Film Board of Canada was founded.

In 1945, the Soviet army announced the fall of Berlin and the Allies announced the surrender of Nazi troops in Italy and parts of Austria.

In 1960, Caryl Chessman, who became a best-selling author while on death row for kidnapping, robbery and sexual offences, was executed at San Quentin Prison in California.

In 1964, Northern Dancer became the first Canadian horse to win the Kentucky Derby.

In 1965, “Intelsat 1,” also known as the “Early Bird” satellite, was first used to transmit television pictures across the Atlantic.

In 1967, the Toronto Maple Leafs won their last Stanley Cup, beating Montreal 3-1 to take the NHL final in six games.

In 1986, Prince Charles and Diana, Princess of Wales, officially opened Expo ’86 in Vancouver. The world’s fair ran until Oct. 13th.

In 1991, the Supreme Court of Canada struck down a law that forced people found not guilty by reason of insanity to be automatically committed to a mental institution.

In 1998, 11 countries of the European Union agreed to unite their currencies and replace them with the euro. The phase-in period began Jan. 1, 1999.

In 2003, northern cod was officially designated for the first time as “endangered” by the Committee on the Status of Endangered Wildlife in Canada after its meetings in Whitehorse.

In 2003, China revealed that a mechanical failure on an aging submarine killed 70 sailors during a training exercise in the Yellow Sea.

In 2006, an Armenian airlines Airbus 320 crashed during a heavy rainstorm in waters off Russia’s Black Sea coast, killing all 113 people on board.

In 2006, in his first federal budget, Conservative Finance Minister Jim Flaherty announced the GST would be cut by one percentage point to six per cent as of July 1. (It was lowered to five per cent in 2008.)

In 2008, a tropical cyclone struck Myanmar, leading to an eventual official death toll of 84,537, with 53,836 listed as missing and presumed dead.

In 2009, Michael Ignatieff formally claimed the Liberal Party leadership at a convention held for the first time in Vancouver.

In 2009, Mine That Bird, a descendant of Northern Dancer, became the third Canadian horse (Northern Dancer, Sunny’s Halo” to win the Kentucky Derby. He entered the race as a 50-1 longshot but pulled away on the backstretch and cruised to a stunning 6 3/4-length win. (Canadian horse “I’ll Have Another” won in 2012.)

In 2010, Michelle Lang, a reporter who was killed on the job in Afghanistan, was named the winner of the Canadian World Press Freedom Award. Lang and four Canadian soldiers were killed on Dec. 30, 2009, when the armoured vehicle they were in hit a roadside bomb.

In 2010, finance ministers from the 16 countries that use the euro agreed to rescue Greece with C$110 billion in loans over three years to keep it from defaulting on its debts.

In 2011, al-Qaida leader Osama bin Laden, the face of global terrorism and architect of the Sept. 11, 2001 attacks, was killed in a firefight with U.S. Navy SEALs at a compound in Abbottabad, Pakistan, then quickly buried at sea in a stunning finale to a furtive decade on the run.

In 2011, Stephen Harper’s Conservatives were re-elected to a third consecutive mandate, and their first majority, after winning 167 of 308 seats in the federal election. Jack Layton’s NDP won a record 102 seats to become the official Opposition for the first time, snatching 57 new seats in a major breakthrough in Quebec. The Liberals suffered the party’s worst defeat with only 34 seats. And the Bloc lost official party status, holding onto only four seats. Liberal leader Michael Ignatieff and Bloc leader Gilles Duceppe both lost their ridings, and resigned shortly after. Green Party leader Elizabeth May became the party’s first elected MP. New Democrat Pierre-Luc Dusseault, 19, became the youngest MP in Canadian history.

In 2012 , Opposition leader Aung San Suu Kyi was sworn in to Myanmar’s military-backed parliament, taking public office for the first time since launching her struggle against authoritarian rule nearly a quarter century ago.

In 2013, Stephen Poloz, the former head of Export Development Canada, was named as the next governor of the Bank of Canada, replacing Mark Carney.

In 2015, Prince William and Kate, the Duchess of Cambridge, welcomed their second child — daughter Charlotte Elizabeth Diana. She will be known as Her Royal Highness Princess Charlotte of Cambridge and is fourth in line to the throne.

2015, jockey Victor Espinoza guided favourite American Pharoah to a one-length victory over Firing Line in the 141st running of the Kentucky Derby at Churchill Downs before a record crowd of 170,513. (American Pharoah went on to win the Triple Crown and the Breeders’ Cup Classic, completing the first-ever Grand Slam.)

In 2018, two black men arrested for sitting at a Philadelphia Starbucks without ordering anything settled with the city for a symbolic $1 each and a promise from officials to set up a $200,000 program for young entrepreneurs.

In 2019, Canada’s Kaetlyn Osmond retired from competitive figure skating. The 23-year-old native of Marystown, N.L., She won a world title in 2018 in Italy and two Olympic medals at the Pyeongchang Games. Osmond won Olympic gold in the team event and bronze in women’s singles. She also won a team silver at the Sochi Games in 2014. Her women’s world title was the first for a Canadian in 45 years.

In 2019, Hockey legend Leonard (Red) Kelly, who starred for the Detroit Red Wings and Toronto Maple Leafs, died in Toronto at age 91. The Hockey Hall of Famer won eight Stanley Cups during a stellar 20-seasons. The flying redhead spent nearly 13 seasons with the Detroit as a defenceman, helping the Red Wings win Stanley Cup titles in 1950, 1952, 1954 and 1955. He led the Leafs to Cup titles in 1962, ’63, ’64 and ’67 — the last NHL championship in franchise history. He also moonlighted as a politician and was elected as the Liberal MP for the Toronto riding of York-West in 1962 and again in ’63.

In 2020, North Korean leader Kim Jong Un reportedly made his first public appearance since April 11, following rumours of his poor health or even death. State media showed video of Kim celebrating the completion of a fertilizer factory near Pyongyang. Speculation about Kim’s health began after he missed the April 15 birthday celebration for his late grandfather, which is North Korea’s most important holiday.

In 2021, Brights Grove, Ont., native Mike Weir won his first PGA Tour Champions event by two shots. Weir held steady with pars down the stretch at the Insperity Invitational in Texas. Weir won the tournament by two strokes and finished at 10 under.